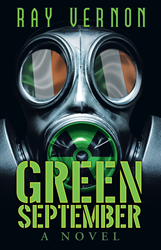 While current anxieties exist with rogue nations like North Korea in possession of nuclear weapons, what if there was a rogue within our own military establishment? In book one of a trilogy, Ray Vernon has created an intense novel about the British military establishment as one London-born Irishman and chief small nuclear weapons expert at the Ministry of Defense goes rogue, potentially threatening the lives of millions of Londoners in pursuit of his ultimate dream of a united Ireland in “Green September.”

As Major Kevin MacAllister carries out his plan, emotions run high and tensions mount as he prepares to sacrifice his friends, upstanding career, and the love of his life—all to pursue his dream. Now only one question remains: Will he be successful, or will his dream die with him in the open sea?

“I have always had a deep interest in history, particularly Ireland’s long and tortured history of invasion and subjugation by a succession of different cultures since the first millennium,” said Vernon. “This novel is a fictional evolution of that history and the ultimate question of, ‘What if one Irishman decided to fight back for all the Irish people?’”

“Set in 1993, Vernon’s debut novel is part The Day of the Jackal and part The Rock (the movie, not the former wrestler),” as stated by Kirkus Reviews.

In this international espionage thriller, an extraordinary nuclear terrorist unfurls a plan with the power to instill fear in millions of Londoners and bring the British government to its knees.

About the author
Ray Vernon grew up in Ireland as the youngest of eight children. After graduating from Cork University, he lived in London, Germany, Italy, and eventually the United States, where his sales and marketing career took him to more than 80 countries. Vernon is now a real estate broker who serves Boston’s South Shore and Cape Cod. He resides in Plymouth, Massachusetts. “Green September” is Vernon’s debut novel. To learn more, please visit http://www.rayvernon.com.