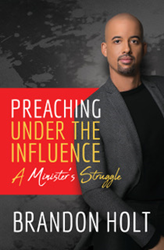 Brandon Holt, "Preaching Under the Influence"

As a preacher, I would get up on Sunday morning knowing I was going to be in front of hundreds of people who were depending on hearing a good message. I would take it before I walked into the church and keep a couple of pills at the pulpit in grape soda.

According to The Centers for Disease Control and Prevention, more than 64,000 Americans died from drug overdoses in 2016, including illicit drugs and prescription opioids, statistics that have nearly doubled in a decade. In fact, one American dies every twelve and a half minutes from addiction. Opioid use has claimed the lives of some of the most prominent celebrities of our time, including Michael Jackson, Elvis Presley and Prince. With the opioid crisis in America at an all-time high, no one is exempt, including faith leaders.

In his newly released book, Preaching Under the Influence, A Minister’s Struggle, Brandon Holt, a nationally recognized pastor and licensed chemical dependency counselor, details his struggle with addiction to prescription painkillers, losing it all, including his church and family and the steps to his recovery.

“I clearly recall the day my addiction began; I was in the hospital recovering from surgery and was given a morphine pump. Each time I hit the pump my whole world opened up and I hadn’t a care in the world,” said Holt. “As a preacher, I would get up on Sunday morning knowing I was going to be in front of hundreds of people who were depending on hearing a good message. I would take it before I walked into the church and keep a couple of pills at the pulpit in grape soda.”

Holt’s world eventually came crashing down when his wife and children left him, and he was forced to resign from his church. He lost his home, his reputation and his integrity. “My unfamiliarity with the opioid epidemic played an enormous role in my hesitance to abandon the pain pills,” he said in an excerpt from the book. “Moreover, as I continued to consume and abuse, my disorder grew and with good reason. According to the National Institute on Drug Abuse, prescription opioids behave similarly to heroin, attacking the very same brain systems.”

In Preaching Under the Influence, A Minister’s Struggle, Holt, also discusses his struggle for social acceptance and his fight for an identity that he could grasp as a bi-racial youth in racially-torn America and tackles approval addiction and the mental health crisis. For Holt, opioid use triggered mental health issues, including depression and bi-polar disorder.

In all that Brandon Holt lost, he never lost hope. Through his faith, counseling and treatment, Holt found his way back to himself, his family and his first love, the church. After reaching sustained sobriety, which is two years drug-free, he went back to school and became a licensed chemical dependency counselor to help those walking in his previous footsteps.

Holt urges anyone suffering with any type of drug addiction, including preachers, to seek help and not suffer in silence, particularly since multiple preachers have died of overdoses in recent years.

"Preaching Under the Influence profoundly and candidly describes the emotional quicksand of opioid use disorders,” said Dr. Ronald A. Stewart, an internal medicine physician. “Brandon Holt accurately depicts the initial emotional euphoria and subsequent behavioral, spiritual and emotional destruction associated with commonly prescribed narcotics. This book is a MUST READ!"

Preaching Under the Influence, A Minister’s Struggle by Brandon Holt, is for anyone struggling with addiction and those who love them. In this well-written, easy-read, Holt helps you recognize the signs of opioid use and lays out the steps to recovery. He speaks from a clinical perspective as a licensed chemical dependency counselor and as a survivor, taking each day one at a time.

About Brandon Holt
Dubbed “The People’s Preacher, Brandon Holt serves as minister of the Connect Church of Christ in Baytown, Texas where he preaches weekly, empowering people to discover their truth in the inspired Word of God. He is also doing critical work by changing lives as a Licensed Chemical Dependency Counselor. Passionate about helping those struggling with opioid addiction and substance abuse, Holt has penned Preaching Under the Influence, A Minister’s Struggle, a compelling look at his personal journey of opioid addiction, his losses, lessons, and the grace of healing available to all. http://www.brandonholt.org