Screenplay of ‘Journey of a Shaman’ Hits Marketplace

The screenplay Journey of a Shaman is based on the non-fiction book of the same title by John Norseman and published by Balboa Press, a publishing branch of Hay House. 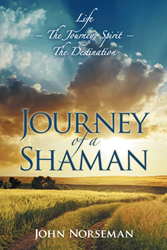 The book has received six 5-Star reviews on Amazon, and international exposure through media outlets and Hay House.

John Norseman’s childhood was anything but a fairy tale but despite his traumatic upbringing he went on to be CEO of a major London company. When he finds his successful life ….empty…. he faces a personal reckoning and gives everything up to become a Shaman. On a path to understanding and love, he discovers tragedy once again. Will John ever find the answers and contentment that have long eluded him? His journey is one of love, forgiveness and achieving the impossible through self-belief.

How the Book became a Screenplay:

The book was first published in 2015 and in 2016 he was invited by Hay House to be a speaker on the Hay House World Summit, (HHWS), an annual event that attracts over 3 million listeners. The title of his one-hour talk/interview was ‘Realize Your Dreams’, and John spoke about the inspirational messages in his book. Many listeners left comments on the HHWS website, all of them favourable.

One of the listeners was Lucinda Spurling, an award-winning screenwriter, and director.
She bought John’s book and saw the potential for a full-length feature movie, contacted John and after a meeting in London they signed an option agreement for Lucinda to write the screenplay based on the book ‘Journey of a Shaman’.

The screenplay is now complete and Lucinda is looking for financing and production partners.

‘’July 24, 2016, Shelley Plumb. Touched My Heart.
This book touched my heart. Well written and engaging, John Norseman takes readers on a spiritual journey. Through the course of the book, I found myself applying his life’s lessons to my own. In reading the book, I became part of the journey and learned more about myself than I had possibly have imagined. Lessons with regard to forgiveness, friendship, spirituality, and LOVE all covered so eloquently page after page. The book made me really think about my life and what my true purpose is. Amazing……I recommend this book without reservation’’.

About Balboa Press
Balboa Press is a division of Hay House, Inc., a leading provider in publishing products that specializes in self-help and the mind, body and spirit genres. Through an alliance with supported self-publishing leader Author Solutions, LLC, authors benefit from the leadership of Hay House Publishing and the speed-to-market advantages of the self-publishing model. For more information, visit balboapress.com. To start publishing your book with Balboa Press, call 877-407-4847 today. For the latest news, follow @balboapress on Twitter or visit facebook.com/BalboaPress.