The Esoqi phone mount is a unique solution which lets drivers keep their hands free, their eyes on the road, and their smartphones charging with the popular Qi wireless charging. 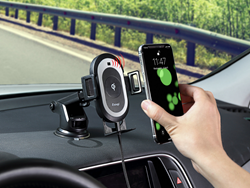 The world of car mounts and accessories has just received a huge boost. Thanks to Esorun tech enthusiasts will now be able to utilize the unique Qi Car Mount. This is a mount that features a number of elements that the drivers do not get with any other solution on the market today. The company launched an Indiegogo campaign to generate funding for the release of the Qi Car Mount, and it has generated more than $60,000! That’s more than 300% of their goal, which means that it has been funded, and will be released to the public. The Indiegogo campaign launched by Esorun first hit the internet on March 27, 2018, and the enthusiasm from individuals has been very special. With the funding that individuals from around the globe have given to the company for this crowdfunding resource, the Qi Car Mount will be brought to the real world.

The Esoqi phone mount is a unique solution for consumers. It is a mount that lets drivers keep their hands free, their eyes on the road, and their smartphones charging with next generation Qi wireless charging. While commuting to and from work, or on a road trip, consumers can have their handsfree device running, charging, all without breaking the local laws.

Esorun’s focus with the Qi Car phone holder is to help alleviate charging and smartphone use while people were driving. Distracted driving, charging, and other problems may arise when individuals are trying to use technology in their motor vehicles. With the release of the Esoqi Mount, individuals do not need to worry about those problems any longer. This mount securely holds most smartphones, charges them wirelessly (where available), and is 100% hands free while in use. If need be, a person can use 1 hand to remove, adjust, and place the device into the mount.

Qi wireless charging is the future of smartphone technology, and with the funding of the Esorun Indiegogo campaign, the future is now! Thanks to the public, The Esoqi car Mount is a reality, and will bring an incredible resource for smartphone users that are on the road for any given period of time. The successful Indiegogo campaign elevates the Esorun company and delivers exemplary technology to the public.

About Esorun:
Esorun is a company that is dedicated to creating gadgets and accessories for smartphones. They are an innovative company that works on creating power banks, chargers, data cables, and much more. The company has been creating outstanding solutions since 2009, helping the public get solutions that work with all smartphones.

The mission statement of Esorun has been stated as, “Enjoy your life”, and with the products that they put out, it is a lot easier to manage, that’s for certain. With the release of the Esoqi smart car mount, they once again prove that they have the public in mind, not just profit.

Esoqi in landscapeEsoqi could be 360 degree to rotate. Dash, windshield, and airvent attachements included

The Esoqi wireless charging mountMake charging your phone in the car the easiest it's ever been.