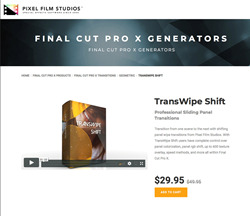 Transition from one scene to the next with shifting panel wipe transitions from Pixel Film Studios. With TransWipe Shift users have complete control over panel colorization, panel RGB shift, up to 600 texture overlay, speed methods, and more all within Final Cut Pro X.

With TransWipe Shift the possibilities are truly endless. Users can transition from one scene to the next in absolutely any angle, color, colorization, color shift, and more all with a wide range of stylistic transition all within Final Cut Pro X. Users have complete control over stylizing desired textured overlay, panel colorization, animation, and more with just a click of a mouse.

TransWipe Shift was professionally designed to work seamlessly inside of Final Cut Pro X. As a transition effect each TransWipe Shift preset can be dragged and dropped onto media and previewed in real time. With the published parameters found in the FCPX inspector, users have the ability to make further adjustments with ease.