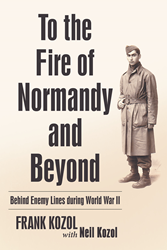 Like many young men, Frank Kozol left home to serve his country during World War II. Frank’s story is unique in that he served as an embedded liason for the U.S. Army with the French resistance, making his tale one of danger and secrecy. Decades later, his fascinating life story is being brought to the public.

In “To the Fire of Normandy and Beyond: Behind Enemy Lines During World War II,” Frank Kozol unveils his life story, chronicling his time leaving home as a young man to his time during World War II and beyond, where he went on to become a successful optometry professor.

Frank’s wartime activities were classified, so his colleagues never knew how he spent his years during the war on assignment. His children and grandchildren also asked for stories from his time during World War II, so Frank decided to write them down before his memory faded.

“My father was a great storyteller and it was his wish to have this book published,” Neil Kozol said. “It was my honor to respect his wishes and I hope that others can learn from and enjoy reading about what life was like on the frontlines of one of the most infamous wars of our time.”

In “To the Fire of Normandy and Beyond,” readers will be riveted with Frank Kozol’s tale as they dive deep into history from those who know it best−the soldiers, like him, who protected our country.

About the Author
Frank Kozol was an accomplished World War II veteran who later went on to become a revered Professor of Optometry at the Massachusetts College of Optometry and developed a successful private practice. He passed away in 2008 at the age of 83. His son, Neil Kozol, published his father’s book so that others could hear his story.