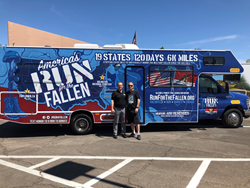 “Cruise America is honored to be part of such a powerful display of appreciation to our service men and women,” said Cruise America Vice President Mike Stoner.

Cruise America, the nation’s largest RV rental firm, has partnered with Run for the Fallen, a relay event that will span more than 6,000 miles across the United States to honor military service men and women who have lost their lives in the War on Terror. The Arizona-based RV rental company donated the use of two RVs that will carry volunteers and staff across the country as they aid runners on the route for nearly four months. One RV has been wrapped in a custom design donated by Splinter Creative that features all 20,000 names of the fallen heroes that will be recognized throughout the run.

“Cruise America is honored to be part of such a powerful display of appreciation to our service men and women,” said Cruise America Vice President Mike Stoner. “We have been a proud supporter of Run for the Fallen for the past few years and knew we wanted to contribute to their national tour this year.”

The 6,100-mile trek kicks off on Saturday, April 7 at Fort Irwin in California and is scheduled to end August 5 at Arlington National Cemetery in Virginia. This year marks the 10th anniversary of the Run for the Fallen and will honor the service men and women from all branches of the U.S. military who have lost their lives in active duty or as a result of active duty since the War on Terror began. Every mile, the relay team will stop at a pre-staked “Hero Marker” with an American flag and read aloud a short tribute to those fallen men and women. The event will bring runners from all over the country together to cross 19 U.S. states in 120 days.

“Words cannot adequately describe the appreciation we feel towards our generous supporters,” said Run for the Fallen Founder and Executive Director George Lutz. “Cruise America plays an instrumental role in making this year’s event possible and will touch the lives of tens of thousands of people across the nation as we pay tribute to our country’s fallen heroes.”

Run for the Fallen is organized in partnership with Honor and Remember, a nonprofit group dedicated to honoring the men and women of the U.S. military who have lost their lives in service to their country. For more information about the Run for the Fallen, visit RunForTheFallen.org. For more information about Cruise America, visit CruiseAmerica.com.

About Run for the Fallen
Jon Bellona, inspired after the death of his college roommate and friend 1LT Michael Cleary in Iraq, created a national run of remembrance. Beginning Flag Day, June 14, 2008, a dedicated team of runners ran across America from Fort Irwin, CA to Arlington National Cemetery, one mile for every member of the United States Army, Navy, Air Force, Coast Guard and Marines killed in Operation Iraqi Freedom. Each year since the run across America, runners from around the world have joined Run for the Fallen in remembering our fallen heroes. Over 180,000 miles have been collectively run in remembrance of those fallen in those recent operations. http://www.runforthefallen.org

About Honor and Remember
After the death of his eldest son Tony in Iraq, Gold Star father George Lutz recognized the need to educate the nation on the precious cost of freedom. His mission became raising awareness about the sacrifice made by military men and women who died for their country through the creation and establishment of a distinct and tangible symbol of remembrance. The Honor and Remember Flag was unveiled nationally on Memorial Day 2008 to perpetually recognize the sacrifice of our fallen military heroes and their families. The flag is now being embraced by veteran and service organizations, businesses and patriots and endorsed by legislation in cities and states as their official symbol. Additionally, it is being flown by thousands of Americans across our nation, becoming a nationally accepted symbol of remembrance. You can learn more and sign the petition to support this campaign by visiting http://www.honorandremember.org