"Rosewood: An Island Plantation" is Beverly Ferebee Heyde's Third Novel in the Saga Series Following the Period Novels "The Winds of Change" and "Caty Maclean"

Heyde's recently released novel, "Rosewood: An Island Plantation" by Page Publishing "Traces the remarkable saga of a family through war and peace, love and disaster, and its controversies over slavery," and is set in the era of post-Revolutionary War-South. The story takes place on the Golden Isles off the coast of Georgia, "Home to stately mansions, where slaves tilled the soil that produced the "gold" in the shape of cotton bolls, and that gave to the planters of these plantations a richness of living unequaled by time." 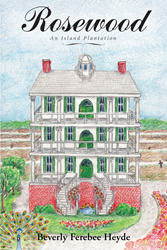 "The British had left Charleston, South Carolina in 1782, at the close of the Revolutionary War, leaving behind a wake of destruction." Henry Edwards, former captain of the American warship "Old Faithful," had paid the town a visit in 1783. Here was what he saw: "Fire had destroyed a large number of buildings. Hardly a house north of Broad Street had escaped the damage by shells from the British warships, and the houses south of it had been almost equally damaged by the batteries on the islands and the guns of the fleet. No squirrels were found, no birds to dispel the dead quietness with song. The neglected rice fields were overgrown with course grass. The indigo vats had gone to ruin; the little provision crops, which the women had striven to grow, were the only produce of the plantations. On many of these country estates, there was not a horse, cow, pig, or chicken to be seen. Of money, there was literally none."

"Here is the story of a patriot who captures the heart of a Charleston widow of French Aristocracy. Their life is one struggle —The passionate struggle of their stormy marriage, a struggle from island jungle cabin to plantation mansion. The abiding passion that held them together—Their dream for an island empire."

Published by New York City-based Page Publishing, the author, Beverly Ferebee Heyde, weaves her love and interest of local history into her well-researched and well-documented work, immersing the reader in the atmosphere of the era she writes about. "Rosewood: An Island Plantation" is endowed with historical weight and timeless themes, peopled with compelling characters who lived in extraordinary times in American history.

Readers who wish to experience this resonant work can purchase “Rosewood: An Island Plantation” at bookstores everywhere, or online at the Apple iTunes store, Amazon, Google Play, or Barnes and Noble.