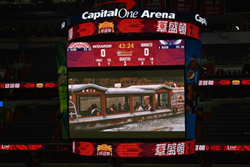 Suzhou Tourism spent the holidays with the NBA’s Washington Wizards this year as part of the team’s annual Chinese New Year celebration. During the game against the Charlotte Hornets on Friday, February 23, Suzhou Tourism branding was prominently visible throughout the Capital One Arena in Washington, D.C., including a destination video that played on the scoreboard screen during team warm-ups; large-scale digital advertisements placed at the arena entrance and two VIP lounges; and logo placements around the court that were visible to more than 17,000 fans who were in attendance and more than 250,000 households via television broadcast.

Suzhou Tourism’s presence in the national capital of the United States was also recognized by Washington Wizards’ power forward Jason Smith, who donned a traditional Suzhou silk robe while posting about Suzhou from his Instagram account, reaching more than 27,000 followers. Banner advertisements also ran on the Washington Wizards website February 9 – 24 as part of the celebration.

About Suzhou
Suzhou, the "Venice of China," is known for its elegant stone bridges, canals, flowing water, and noteworthy architecture. Located in the center of the Yangtze River Delta, approximately 70 miles west of Shanghai, Suzhou is one of the oldest cities in the Yangtze Basin dating back more than 2,500 years. The city boasts the beautifully manicured Classical Gardens of Suzhou, nine of which have been designated a UNESCO World Heritage Site, as well as 11 destinations along the Grand Canal that have also been designated world cultural heritage sites.

Destination videos and images, logo placements, banner advertisements, and player interaction on social media were all components of a partnership with the Washington Wizards.