Suzhou Tourism Celebrates the Art of Bonsai in San Francisco 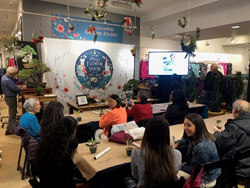 Suzhou Tourism brought the beauty of the destination’s classical gardens to San Francisco during complimentary bonsai workshops that were held at the annual Macy’s Flower Show on Saturday, March 24 and Sunday, March 25. The hands-on sessions took place at the store’s flagship location in Union Square (170 O’Farrell Street) in the Enchanted Garden Studio. Bonsai experts George Hass, Chris Ross, and Candace Key from Oakland’s Bonsai Garden at Lake Merritt led the sessions, while a Suzhou Tourism representative provided the group with a detailed overview of the destination and shared more about its rich appeal through video and other dialogue. More than 60 attendees discovered the elegance of Suzhou-style bonsai trees, learned how to care for and cultivate the delicate plants, and took home an individual bonsai tree to continue practicing what they learned during the hour-long sessions.

To coincide with the event, Suzhou Tourism launched an online sweepstakes that invited consumers to enter to win a trip to Suzhou, where the itinerary will include the destination’s signature activities such as a garden tour, a visit to the No. 1 Silk Factory, a dumpling making class, and calligraphy instruction. The prize also features roundtrip airfare for one from a major North American gateway city, three nights of hotel accommodations, and a fully-guided tour of the destination including a visit to some of its famous gardens. Consumers can enter the sweepstakes at http://www.traveltosuzhou.com/bonsaisweepstakes now through 11:59 p.m. on April 13.

About Suzhou
Suzhou, the "Venice of China," is known for its elegant stone bridges, canals, flowing water, and noteworthy architecture. Located in the center of the Yangtze River Delta, approximately 70 miles west of Shanghai, Suzhou is one of the oldest cities in the Yangtze Basin dating back more than 2,500 years. The city boasts the beautifully manicured Classical Gardens of Suzhou, nine of which have been designated a UNESCO World Heritage Site, as well as 11 destinations along the Grand Canal that have also been designated world cultural heritage sites.

About the Macy’s Flower Show
For more than 70 years, Macy’s Flower Show has delighted generations of floral aficionados with over-the-top presentations of lavish gardens that showcase millions of live flowers, plants, and trees from around the globe. Native to many different landscapes, Macy’s Flower Show features floral material blooming in unison despite their unique climatic DNA. Taking root in unexpected settings such as store countertops, windows and specially-designed architecture, including grand bridges, columns, and topiaries, Macy’s Flower Show is staged in unique fashion at each of the three locations nationwide – New York, Chicago, and San Francisco. More information is available at http://www.macys.com/flowershow.