"Desert," Yelena Eckemoff's latest in a string of sweeping concept albums, captures the Arabian Desert in all its mystery and natural allure not only with its 11 thematically linked compositions, but also with original poems, prose, and (as she frequently provides) album art. Featuring Oregon oboist Paul McCandless, Norwegian bassist Arild Andersen, and super-versatile drummer Peter Erskine, "Desert" is a culmination of Eckemoff's lyrical blend of jazz and classical music. 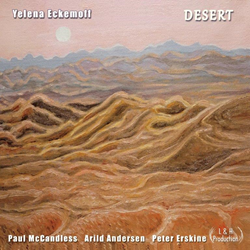 I thought of Paul [McCandless] and his oboe, on which he is so expressive, and decided this is the sound I wanted. As for Arild [Andersen] and Peter [Erskine], they had just the right voices for my melodies and compositions. I feel like when I have these guys around, I can do anything.

It takes a discerning eye, or in this case ear, to envision the desert as more than a vast, arid wasteland. Pianist/composer Yelena Eckemoff succeeds in musically portraying many of this daunting environment’s mysteries and its boundless allure on her new recording, "Desert", to be released May 4 on her imprint L&H Production.

Each of "Desert"’s 11 thematically linked compositions, given such descriptive titles as “Bedouins,” “Mirages,” “Condor,” “Oasis,” “Dust Storm,” and “Sands,” showcase Eckemoff’s distinctive style that blends classical music with jazz improvisation to create works that range from the ethereal to the mercurial to the dissonant.

Yet Eckemoff’s music is infused with her Russian soul, vivid memories of picture books she entertained herself with as an only child, and what she calls the “sinuous” nature of her personal narrative which includes having emigrated from the former Soviet Union to the U.S. with her husband in 1991. With her modern, sometimes free-leaning approach and the weight and intensity her composing and playing attains, she and her music are strikingly original. “I’m a very emotional person,” she says. “So many things have vanished from my life. When you express these things in your music, when you share your experiences, you compensate for your losses. Music makes you whole again.”

What is remarkable about Eckemoff, who released numerous albums, some of them classical, before making her bona fide jazz debut in 2010 with the release of the winter-themed trio recording Cold Sun, is that you never know in which direction she’s heading. One key to her artistry is her dedication to music that has many intertwined threads. “I haven’t composed much for solo piano,” she says. “I’m always hearing instruments and the ways they go together.”

For "Desert," Eckemoff read extensively about the subject, including several books about Bedouins. “I wanted to know what kind of people they are,” she says. “How is it that they’ve managed to change with the times, finding freedom in such harsh conditions. I wanted to capture the true soul of Bedouins.”

In envisioning the recording, Eckemoff says, “I thought of Paul and his oboe, on which he is so expressive, and decided this is the sound I wanted. Peter helped me connect with Paul, who really is the reason for this group. As for Arild and Peter, they had just the right voices for my melodies and compositions. I feel like when I have these guys around, I can do anything.”

Born in Moscow, Yelena Eckemoff has been composing since she was four years old, her musical impressions taken from her mother, a pianist and teacher. Years of academic studies at Gnessins School for musically gifted children, followed by the Moscow Conservatory, provided a solid foundation in classical music. But as she grew into her teens she developed an interest in other musical styles, like pop, rock, and jazz, and this was a time when jazz recordings were so hard to come by in Russia.

In 1987, in a pivotal moment for Eckemoff and many other Russian musicians, she attended Dave Brubeck’s legendary concert in Moscow. Though she had already started playing jazz before seeing Brubeck, mainly traditional styles and bebop, this was one of the first jazz concerts she had attended, and she was so impressed she formed her own band and “tried to play jazz.” But her songs proved too complicated for her fellow musicians (and have gotten no easier, as McCandless, Andersen, and Erskine all attest in a videotaped interview after recording "Desert").

Alluding to such styles as blues, jazz-rock fusion, and the occasional funk, Eckemoff’s albums have ranged far and wide while continuing to deal in high concepts. "Glass Song" (2013), the first of her albums to team Andersen and Erskine (who surprisingly had never previously played together), is an environmental treat boasting songs about rain, melting ice, and clouds. "A Touch of Radiance" (2014), dedicated to happiness, features Mark Turner, Joe Locke, George Mraz, and Billy Hart while "Lions" (2015), featuring Andersen and Hart, captures life in the savanna with songs about those majestic animals and their cubs as well as migrating birds and tropical rains.