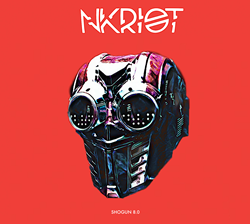 Breathing new life into noble, abandoned machines and electronic instruments once cherished by their owners but now discarded like interplanetary contraptions no longer useful to their original masters, NKRIOT resurrects them with a renewed purpose.

Nonconformist. Rebel. Savior. Walking amongst the smoldering embers of a dystopian machine-dominated land, Kristopher Escajeda gingerly captures the prized remnants of discarded instruments, electrical circuit boards and other sound emulators tossed away by previous owners. Fashioning the broken components into wholly new, resurrected instruments that suit his eclectic musical needs, Escajeda strides forth from his studio and out onto the stage where he seamlessly interfaces with the machines he created, playing the music and songs he composed. Onstage and of one mind with the RIOTLAB, Kristopher Escajeda is dead. Long live NKRIOT. NKRIOT’s “Shogun 8.0” (NKRIOT Productions) is out now.

Breathing new life into noble, abandoned machines and electronic instruments once cherished by their owners but now discarded like interplanetary contraptions no longer useful to their original masters, NKRIOT resurrects them with a renewed purpose. Like a benevolent humanoid, NKRIOT labors over his rusted island of salvaged parts, a world unto itself teeming with circuitry and kinetic potential. “Shogun 8.0” is at once clever and ominous, cute-yet-fiendish. Escajeda’s exquisitely processed vocal lends a disembodied feeling to the track with a portentous incantation at the outset. The effect is dynamic, dramatic, cinematic. A severely syncopated bridge evokes future-trap music and it’s curious how this eclectic track manages to be at once retro and futuristic-sounding. The synthesizers have a distinct character, their timbre dripping like shape-shifting mercury from NKRIOT’s black leather-gloved fingertips. The track, like much of NKRIOT’s music, is not easy to be categorized, though it’s thoroughly electronic music. There’s a very forward-looking, Stutter Edit sound that’s purely cinematic and multi-dimensional. This is not your typical EDM for the club or festival dancefloor; it’s much more than that. The circuits pulse with electrical energy, helping channel NKRIOT’s voice and digital signals into an ecstatic swirl of thumping, booming punk-electronic music.

NKRIOT is an electronic music pioneer and inventor and a founder of the music genre known as “goji.” Hailing from Boyle Heights, California, NKRIOT champions a unique, kinetic sound based around an ever-evolving custom rig of hardware known as the RIOTLAB. When performing live, the artist known as NKRIOT (real name, Kristopher Escajeda) wears his signature hand-made mask. This mask is not merely a prop; it’s a working electronic instrument that allows the artist to interface with the original music he’s performing live, for example by allowing him to process his own vocals in real-time while singing. None of the music performed during live NKRIOT’s shows is pre-recorded, not even the original productions composed by Escajeda himself. Instead, more akin to a live band or live musician, NKRIOT performs his compositions with instruments, using electronic effects controllers, an electric guitar, drum pads, synthesizers and other elements to create a wholly new experience. No two NKRIOT shows are exactly the same. NKRIOT’s first full-length studio album, Riot, spawned the single, “Reality Pages,” an idiosyncratic track that caught the attention of corporate brands like LinkedIn and Jarritos and caused them to sign Escajeda as a brand ambassador, tapping into his authenticity and street cred. The follow-up album, Virtual Climax Recordings, is due for release in spring 2018 with the first single being, “Shogun 8.0.”