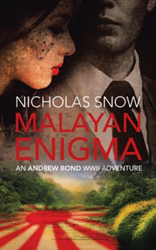 Nicholas Snow kicks off the first of his Andrew Bond’s World War II adventures in “Malayan Enigma: An Andrew Bond WWII Adventure” (published by AuthorHouseUK in November of 2016), a rousing action yarn set near the end of 1941 in Singapore and Malaya.

The war in Europe has been raging for some time. The Japanese attack on Pearl Harbor is only days away. Bond has been ordered by his superior in the British Secret Intelligence Service to slip into neutral Siam and report whatever he can about Japanese intentions there. Before he knows it, Bond is up to his stiff upper lip in an impending Nipponese invasion.

As the war finds its way into this often-incongruous locale of sweltering humidity, dense jungles, beautiful beaches, and exotic nightlife, Bond finds himself romancing a gorgeous woman, dodging death at the hands of the Yakuza, and doing his bit to thwart the advance of the invaders. Eventually, he obtains the enemy’s Enigma coding device. Decoding it has the potential to help the Allies turn the tide of initial Japanese victories. To get it to the people who can best put it to use, however, he and his cohorts have to attempt a daring escape past the Japanese army, through the stifling jungle, and across the sea to Australia. Will they succeed?

“Malayan Enigma” is the first of a series of stories featuring the same protagonist and his experiences during World War II. Although fictional, Snow says “the stories are based on solid historical and technical facts.”

About the Author
Nicholas Snow is the pen name of Nicholas C. Kyriazis, who holds a diploma and doctorate in economics from the University of Bonn, Germany. He has acted as visiting professor at Harvard and at the University of Trier. He has worked as a consultant to the directorate general of research of the European Parliament, to the National Bank of Greece and to the Ministries of National Economy and of Defence, and has served as secretary general of public administration. A professor of economics at the University of Thessaly, he is a member of the board of Alpha Trust Investment Fund (listed on the Athens Stock Exchange), vice president of Ergoman Telecommunications and vice president of the Kostas Kyriazis Foundation.