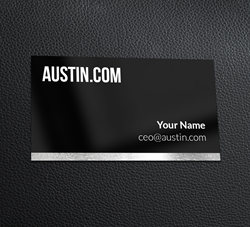 [Austin.com] has built-in strong revenue opportunities via the annual rentals of custom Email addresses NAME@austin.com and subdomains INDUSTRY.austin.com, often renting from a few hundred annually to several thousand per year.

Austin.com, the geo-city, premium domain name is now made available for sale.

The domain name acquisition allows a new owner to utilize it for the built-in, "Austin authority."

Strategic uses for market share, brand authority and relevance to Austinites can include political campaigning, solar and other energy companies, real estate firms and more.

OODIENCE.com, a Toronto-based M&A firm dealing in strategic media channel sales has been retained as the exclusive representation for this premium domain sale.

A similar sale of Denver.com, reported as a "7-figure deal” was acquired by Kentwood Real Estate's Peter Niederman in 2012 and was "paid for in 3 years" with the growth in business.

In a digital sense, Austin.com is the tallest building downtown. No other domain conveys the instant credibility and relevance in the city.

Geo-domains are often held for decades as owners rarely have a motivated reason to release their asset.

Among these is David Castello, owner of Nashville.com who views the value of their city domain as worth "$40M or more" and is "not for sale".

As communication channels get more fragmented and more noisy, authorities win. Powers of scale are the motivation for many billion dollar mergers and acquisitions.

The importance of authority-brand value is a must for competitiveness.

In 2017, Austinite Noah Kagan, CEO of the globally successful daily deals site AppSumo re-branded and purchased Sumo.com for $1.5M after 7 years of negotiations - because it, "plants your flag on top of the hill".

Similarly, Ring.com, recently acquired by Amazon for $1 billion underwent a re-brand during their growth to the shorter Ring.com domain which it purchased for $1 million. CEO Jamie Siminoff has estimated the domain name's revenue value to the company to have been worth, "between $30M - $50M."

"When you move to Texas [from Silicon Valley] the only destination to consider is Austin," says Uve Poom, CEO of Austin based BudgetMatador.

Austin is also growing as a hub for the blockchain and crypto-currency sector.

With New York Coin being launched by Kevin O'Leary, Berkely coin recently launched by the city and the City of Dubai issuing their own coin - there is opportunity for an Austin crypto-currency coin launch as well.

The domain also has built-in strong revenue opportunities via the annual rentals of custom Email addresses NAME(at)austin.com and subdomains INDUSTRY.austin.com, often renting from a few hundred annually to several thousand per year.

For details, bids or press contact lead intermediary Rob Toth at the OODIENCE office (416) 639-2227 or by email contact(at)oodience.com