Recent release “Yankee Doodle Dandy” from Page Publishing author Charles Carlson is the historically accurate story of love and war told from the perspective of fictional characters based on real people closely associated with George Washington and other renowned figures from America’s battle for independence. 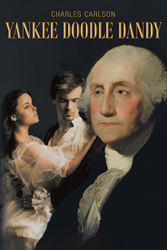 Charles Carlson, a longtime resident of Alaska, writer and former copyeditor for the Anchorage Times newspaper, has completed his book “Yankee Doodle Dandy”: an engrossing fictionalized account of the Revolutionary War that brings history to life in vivid detail.
Prior to the Revolutionary War, George Washington met a fifteen-year-old local farm boy, Robert “Robbi” Marlowe, riding his huge horse Big Dan. Washington was so impressed with the way Robbi trained Dan he hired him to train a new group of horses he had just purchased. While training the horses, Robbi often ran errands for Washington to nearby towns. Riding Dandy, one of the best horses he had trained, Robbi entered a steeplechase race and won a huge purse of one hundred silver dollars, which he invested in land. During the Revolutionary War, Robbi would become chief dispatch rider for Washington. Robbi’s girlfriend and future wife Abigail was the daughter of a wealthy plantation owner, and they were married in a most lavish affair.
George Washington was elected by Congress to be a general of the army, but there was no army. The Americans were a group of untrained, poorly equipped citizen militia who had banded together to attack the British that had raided Lexington and Concord, Massachusetts, and started the Revolutionary War. Washington had to train this ragtag citizenry and turn it into an army that would defeat the greatest army and navy in the world, the British. Washington won the first confrontation over the besieged British in Boston.
The war raged on from Quebec, Canada, in the north to the southern states. After winning the siege of Boston, Washington lost Long Island and New York City. After these major losses, he took a big gamble and attacked the Hessians in Trenton, New Jersey, winning a major victory and saving the revolution. But the war raged on until the final victory over the British at Yorktown, Virginia, which resulted in American independence.
Published by New York City-based Page Publishing, Charles Carlson’s book is a compelling fictionalized account depicting many of the exceptional men whose exploits changed the course of American history in the Revolutionary War.

Readers who wish to experience this engrossing work can purchase “Yankee Doodle Dandy” at bookstores everywhere, or online at the Apple iTunes store, Amazon, Google Play, or Barnes and Noble.