Calvin Cherry’s New Book “STOKER: Evolution of a Vampire” is a Thrilling Novel Fusing the Facts and Legends Involved in the Creation of Count Dracula

Recent release “STOKER: Evolution of a Vampire” from Page Publishing author Calvin Cherry is a masterful historical novel that focuses on the life and legacy of the man behind Count Dracula—Abraham “Bram” Stoker—and what events motivated him to write his Gothic tour de force in the late nineteenth century. 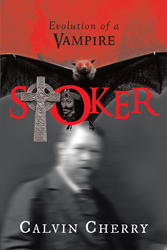 Calvin Cherry, who lives in Georgia and has been a die-hard vampire fan since age seven, has completed his new book “STOKER: Evolution of a Vampire”: a mesmerizing fictional account of the historical Dracula and the events surrounding his creation, heavily drawing on vampire lore, historical “vampiric” personages such as Vlad the Impaler, and the vast existing Dracula commentary, as well as Stoker’s own notes, research materials, and private journals.

Author Cherry writes his debut novel with the consuming, enlivening attention one would expect from a biographer paying homage to Stoker: “As Bram’s quick and neurotic glances toggled back and forth between the broken window and his desk he began to write: ‘It has been seven years—seven long years since the dream awoke me with a feeling of such an unspeakable horror. I now pray for my sanity every time I close my eyes . . . I fear it might return.’ Little did Stoker know that the beast he was meant to write about would forever be entwined and associated with the man—the author—of whom he wrote, for just like Victor Frankenstein’s monster, the reanimated corpse was forever his burden; and it was his own creation that led to his demise.”

Published by New York City-based Page Publishing, Calvin Cherry’s new book aspires to educate and entertain fans of horror, explore the roots of the genre, and pay tribute to the legendary Bram Stoker, the man whose nightmares would spark the dreams of many others even centuries later.

Readers who wish to experience this distinctive work can purchase “STOKER: Evolution of a Vampire” at bookstores everywhere, or online at the Apple iTunes store, Amazon, Google Play, or Barnes and Noble.