The Federation of Tamil Sangams of North America (FeTNA) will be hosting its 31st Annual Tamil Convention, June 29th to July 1st, 2018 at the Dr. Pepper Arena, Frisco, Texas, USA. The central theme of the convention is Heritage, Youth & Women. 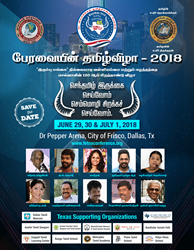 FeTNA three day convention planned to be held between June 29th – July 1st at the Dr. Pepper Arena in Frisco, TX. The central theme of this year’s convention is Heritage, Youth & Women.

Federation of Tamil Sangams of North America (http://www.fetna.org) an umbrella organization of more than 50 Tamil associations across North America today unveiled its program schedule and the convention website for the three day convention planned to be held between June 29th – July 1st at the Dr. Pepper Arena in Frisco, TX. The central theme of this year’s convention is Heritage, Youth & Women.

The convention among other things is going to celebrate the culmination of global efforts to raise US$ 6 MM to setup a Tamil Chair at Harvard University. Tamil language is one of the oldest classical languages of the world and the only Indian language to be recognized as an official and/or minority language in countries like Singapore, Sri Lanka, Malaysia, Canada, Mauritius and South Africa.

Several Indian American Tamil Pioneers in the field of business, technology, education, medicine, government and public service have been invited to participate in the convention that kicks off on June 29th with a one-day Entrepreneur Forum (TEF Tamil Entrepreneur Forum) called TEF TALK which also includes TEF JUNIOR a program to encourage the spirit of entrepreneurism in the youth. A continuing medical education (CME) session is also planned for the benefit of several hundred medical professionals that are expected to attend the convention. A grand welcome reception is also planned for the evening of June 29th, 2018.

The event is held at a budget of nearly US$ 1 MM with 1/3rd planned to be raised from individual donors and 2/3rd through business sponsors. According to the coordinator for the event Mr. Caldwell Velnambi the vibrant Indian American community is becoming an important segment for marketers as the convention provides an ideal ground to advertise with a 360-degree reach.

A highly interactive modern website has been launched (http://www.fetnaconvention.org) and an extensive social media campaign is also being planned. Nearly 5000 people are expected to attend this event with 1500+ from outside of DFW giving a flip to Frisco economy. The City of Frisco declared January’2018 as the Tamil Heritage Month. Incidentally Tamil became the first language to be eligible for foreign language credit in Frisco ISD.