Improving reality capture speed to solution from initial planning and design to construction to ongoing operation for all stakeholders in the built environment. 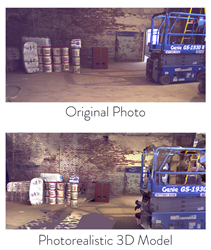 Kaarta today made another leap forward in the advance of rapid 3D reality capture with the launch of Kaarta Reality Layer, augmenting its already geometrically accurate and robust spatial capture with the richness of color information running the gamut from point cloud to surface mesh to RGB point cloud to rich photorealistic model. These integrated colorization capabilities make it possible to quickly capture and process just the level of color detail needed for a wide range of built environment applications from planning and design to construction to ongoing operation and maintenance. Further, the ability to automatically generate photorealistic 3D models promises to make a host of new mixed reality applications possible.

At its most immersive and photorealistic level of detail, Reality Layer automatically connects the dots on a dimensionally-accurate, high-fidelity point cloud to create faithful surface models for the seamless overlay of high resolution color imagery – all rapidly captured and processed with one mobile handheld device. Reality Layer reveals features such as surface textures and colors, locations of electrical, plumbing, HVAC and other features, or even details as fine as the text on signage or labeling.

Substantially more sophisticated than simply assigning color values to the XYZ coordinates of a point cloud to help visualize the real-world environment, Reality Layer can create a registered visual model using actual images, not points. This capability makes it far easier to understand the space using the most common visualization tool: the human eye. The process is simple:

Why it’s a Game Changer

Traditionally, it’s common to have dozens of drawings, scans, and image files – captured with multiple products, by multiple teams of people, in multiple stages over many days, weeks or months – all to provide answers about a single space, and even still they are difficult to align with each other and result in additional workflows. Kaarta’s patent-pending Reality Layer condenses that work to one product, operated by one person in a single pass. Kevin Dowling, CEO of Kaarta said, “We are proving that rich digital models of the world can be captured and put to use without costly and time consuming methods, making them accessible to many more users and able to be done on a frequent basis. Now with Reality Layer, complete, authentic, and immersive models are quick and easy.”

This latest advancement has far-reaching benefits for professionals who require accurate and faithful 3D information.

After scanning the boiler rooms of a major medical center, Ray Steeb, CEO of Fasttac said, “Kaarta is a huge win for applications like facilities maintenance since it is incredibly easy to capture the layout of spaces that do not have up-to-date drawings, and that’s about 90% of existing buildings.” He continued, “The key is that we can then use the scans right away without having to model. And now, Reality Layer makes it even easier for users to get a visual ID on any given area.”

Reality Layer is now shipping on the Kaarta Contour™ mapping system, and a free software upgrade is available for existing Contour owners. Integration into Kaarta’s additional devices to follow.