SLCC awards honor graduates and former students for professional excellence and exemplary service in their communities. 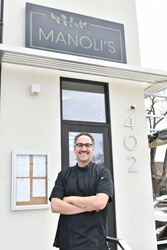 Salt Lake Community College has named Angela Brown, executive editor of SLUG Magazine, and Manoli Katsanevas, owner of Manoli’s restaurant, as SLCC’s 2018 Distinguished Alumni award recipients. Both will be recognized during SLCC’s commencement ceremonies May 4 at the Maverik Center in West Valley City.

In junior high, Brown was already an aspiring entrepreneur, starting a landscaping business so she could afford to buy records. Her other passion early on was photography, so, she chose to take concurrent enrollment classes at Salt Lake Community College, where she earned an Associate of Applied Science degree with an emphasis in photography. With supportive parents, she had the freedom to have control over her education, focusing on music, photography and writing.

After SLCC, she worked for a few companies that left her “unfulfilled,” and she decided to figure things out, take some risks, make some mistakes, fail, learn from it and try again. She thought about leaving Salt Lake City in search of a more vibrant music and arts culture, but chose to pursue her dreams in Utah. She decided she wanted to make Salt Lake City her home. To that end, one of her greatest professional accomplishments is creating positive change in the city she loves. Brown worked her way up at SLUG Magazine to become owner, publisher and executive editor, helping highlight and support music, skiing and snowboarding and the arts in Utah. The magazine has won many awards under her leadership; with Brown herself receiving the Josephine Zimmerman Pioneer in Journalism Award from the Society of Professional Journalists. As an outgrowth of SLUG Magazine events, Brown is founder and executive director of 501(c)3 nonprofit, Craft Lake City, whose DIY Festival is now in its 10th year.

Brown is a graduate of Goldman Sachs 10,000 Small Businesses program at SLCC, which proved pivotal in helping see herself as a leader, gaining confidence to take risks and create an actionable plan for growing her business. She had the honor of being the graduate speaker for her cohort.

When his Greek immigrant uncle Nick Katsanevas, along with his sister and her husband, started the first Crown Burger in Utah in 1978, it set in motion a career trajectory for Manoli Katsanevas that would one day lead to opening his own restaurant in Salt Lake City. The early influences began at home when his mother cooked traditional Greek foods such as spanakopita, dolmathes and pasticcio for huge family gatherings. His father and another uncle started the second Crown Burger, and when Katsanevas was 13, he started working in the family business. He loved the restaurant business then and knew in high school an office job wasn’t for him – he wanted to cook and maybe own a restaurant.

Katsanevas enrolled at Salt Lake Community College’s Culinary Institute after graduating from Skyline High School and by 2009 earned his Associate of Applied Science degree. An adherent to the “tough love is the best love” way of learning, he recalls being challenged by culinary Associate Professor Leslie Seiferle. She reminded him of his family in the industry as someone hard working, skilled and very nice and supportive. His time at SLCC helped Katsanevas hone his path in the industry at a price he could afford. He learned the fundamentals and basics that he uses in his career every day.

In 2015, after adding places such as Fleming’s, Smith’s Bistro and Café Niche to his resume, Katsanevas opened Manoli’s, on 900 South in Salt Lake City. His approach is described as a reinterpretation of traditional Greek cuisine, with an emphasis on local and seasonal ingredients. The food and dining experience is racking up awards and accolades, from Zagat and Time magazine, to multiple local review sites and periodicals. He loves being in the kitchen and is still there several times a week. Katsanevas, only 30, values hard work and advises others who are contemplating their own career paths to follow their passion and that success will follow.