A new study, conducted by Qualtrics and co-authored by Marlin, a Connecticut-based workplace communications company, and Sigal Barsade, Professor of Management at the Wharton School, University of Pennsylvania, found that only one-third (32%) of American workers actually believe that they will benefit personally from their employer’s reduced tax rate. 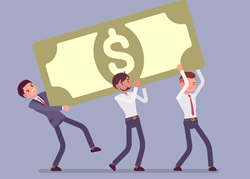 If American corporations have plans to pass on their newly-found tax benefits, they’re not telling their employees. A new study of the American workforce shows that a majority (52%) of American workers say their companies haven’t communicated any plans about how they intend to use their new, reduced tax rate.

The Marlin Workplace Survey, conducted by Qualtrics and co-authored by Marlin, a Connecticut-based workplace communications company, and Sigal Barsade, Professor of Management at the Wharton School, University of Pennsylvania, surveyed a national sample of 1,048 full- and part-time American workers in March 2018.

“We’ve all read about companies claiming that their savings from tax reform will be used to benefit employees, but our research shows that most workers haven’t heard anything about that,” said Frank Kenna, President and CEO of Marlin.

When tax reform is decoupled from the workplace, American workers are somewhat more positive about the personal impact of the tax cuts. When asked about tax reform in general, 42% agree or strongly agree that they expect to benefit from the tax changes.

“American companies are missing an opportunity,” says Kenna. “Employees trust us, but when they see reports claiming that corporations are passing along tax benefits, but they don’t hear it from their own companies, it sows seeds of doubt. This ultimately affects trust, which our survey also shows is critical in running a high-performing organization.”

About the Study
The Marlin Workplace Survey was co-authored by Marlin, a Connecticut-based workplace communications company, and Sigal Barsade, Professor of Management at the Wharton School, University of Pennsylvania. Conducted by Qualtrics, the survey polled 1,048 full- and part-time American workers between March 2 - March 6, 2018. Respondents were recruited from standing online, non-probability-based panels using a quota-based sampling approach to mirror the US workforce based on gender, age and race. The results are accurate at the 95% confidence level plus or minus an average of 3.75 percentage points.

About Marlin
Marlin, a workplace communications company, helps managers reach employees wherever they work, using the latest SaaS-based technology solutions, including flat screens, desktops and mobile devices. Designed specifically for the workplace, Marlin’s patented digital signage products are known for their ease of use, robust content options and flexibility. For 105 years, Marlin has developed and delivered visual communication programs that engage, inform and motivate employees. Learn more about Marlin’s digital signage products and services at http://www.themarlincompany.com.