Ending Hunger in Haiti is Possible, Here's Why 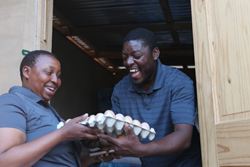 “Ending world hunger is not just about providing meals and food to those in need,” Ogwangi said. “It’s using partnerships and programs that teach communities how to become self-sustaining, and to lead themselves on their own journeys out of poverty.”

Ending hunger in this lifetime is possible, and Rise Against Hunger’s Chief Impact Officer, Edna Ogwangi, traveled to Haiti last month to show the world how a small agricultural project can make a big difference. The Raleigh-based non-profit’s Siloe Agricultural Development Initiative (SADI) project aims to provide sustainability to a small Haitian community and empower the people within it to work for themselves and change their own lives.

In 2015, Ogwangi first traveled to Haiti and asked Rise Against Hunger’s in-country partner, Hearts and Hands for Haiti, what their dreams were for a barren five-acre plot of land outside of a home for displaced youth. With the help of Hearts and Hands for Haiti and a Haitian-led organization called Siloe Mission, Rise Against Hunger committed to funding the SADI project with two water wells, an aquaculture system, a five-acre farm, drip irrigation system, solar panels and the full-time salary of a hired agronomist.

In March, Ogwangi traveled back to Haiti to monitor the progress of Rise Against Hunger’s support. To date, the project has produced thousands of seedlings, a variety of produce, a youth garden has been established and students and adult community members are receiving training in traditional farming techniques by a hired agronomist. A key goal for this project is to encourage Haitian farmers and students to bring back their learnings back to their own families and communities.

Originally from Kenya, Ogwangi knows what it's like to grow up hungry making the battle against food insecurity and projects like SADI are deeply personal. As a child in the 1980s, Ogwangi was in a school feeding program similar to the types of programs Rise Against Hunger offers. Fast forward to today and she now provides the same type of support to beneficiaries — like she once was — all over the world.

“What struck me about the meals I received as a child in Kenya were the bags in which they came in,” said Ogwangi, “The bags said: ‘From the Generosity of the American People,’ and that really stuck with me.”

Ogwangi went on to get an education, and has worked for years to not only feed those in need, but to educate them as well.

“Ending world hunger is not just about providing meals and food to those in need,” Ogwangi said. “It’s using partnerships and programs like the SADI project in Haiti to teach communities how to become self-sustaining, and to lead themselves on their own journeys out of poverty.”