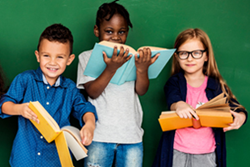 “Military children sacrifice in extraordinary ways because of their parent’s service to our nation. Their education should not be a battle."

The National Military Family Association (NMFA), a nonprofit that works to strengthen military families, has launched the “Education Revolution: Their Right, Our Fight” multi-media campaign to help military families with school-aged children thrive in school, despite constant moves and inconsistent state education standards.

The campaign, which launched in conjunction with the Month of the Military Child, features a one-stop web resource for parents in multiple stages of their child’s education journey. Along with tools to help their child’s educational and emotional struggles, the Education Revolution campaign empowers parents to fight for consistent standards in their child’s schools, school districts, and states.

On average, military-connected students attend up to nine schools before they graduate high school. Many will fall above or below the learning benchmark of each new school. The Education Revolution campaign shares real-life experiences of military families who recently moved or have an upcoming move to a new duty station. It arms parents with tools, like a PCS School Checklist to help prepare for each new military move, and teaches parents how state level standards affect their children’s education. Parents can learn how to identify whether their school district or state has adopted high standards, and how the Interstate Compact on Educational Opportunity for Military Children can help confront school transition issues.

“Military children sacrifice in extraordinary ways because of their parent’s service to our nation,” said Joyce Raezer, NMFA Executive Director. “Their education should not be a battle, and it should not be collateral damage in the fight for more consistent education standards. We are hopeful the Education Revolution campaign will show parents that their child’s education is a battle they can win—and we’re on their side to help them with each victory.”

This new campaign is part of NMFA’s larger initiatives to support America’s 2.8 million military family members through policy and programs that keep them strong.

About the National Military Family Association
The National Military Family Association is the leading nonprofit dedicated to serving the families who stand behind the uniform. Since 1969, NMFA has worked to strengthen and protect millions of families through its advocacy and programs. They provide spouse scholarships, camps for military kids, and retreats for families reconnecting after deployment and for the families of the wounded, ill, or injured. NMFA serves the families of the currently serving, veteran, retired, wounded or fallen members of the Army, Navy, Marine Corps, Air Force, Coast Guard, and Commissioned Corps of the USPHS and NOAA. To get involved or to learn more, visit http://www.MilitaryFamily.org