Brands that made the most buzz at this year’s event included General Motors, Subaru, and BMW 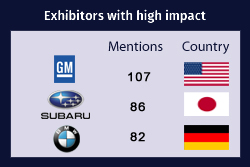 Agreed technology has worked wonders automating mundane media intelligence gathering tasks that were once labor intensive. But at the end of the day, humans have to enter the picture to work on the data compiled by the software and provide quality insight.

Massachusetts based media monitoring company Fullintel has released a comprehensive media coverage and impact report on the recently concluded New York International Auto Show 2018. Over a million auto-enthusiasts visited the show this year.

The report compiled and curated by Fullintel’s team of media analysts has found that attendees have generally been happy with this year’s event with more than 82% percent of people expressing a positive sentiment. It examined more than 7,000 stories and analyzed over 176 million media imprints. Some significant noisemakers this year were General Motors, Subaru, and BMW with 107, 86, and 82 media mentions respectively. A total of 3,384 articles across the world mentioned the show, with 1,434 mentions in the Americas alone.

Some of the top media outlets covering this year’s show were CNET, The Dive, and ABC. Journalists who covered this event included Paul Eisenstein of The Detroit Bureau, Tony Borroz of automoblog.net, and Hayley Lind of The Drive. Some prominent reveals at the auto show this year were the Lincoln Aviator, the 2.0 liter 4-cylindered turbocharged Cadillac XT4 and the Lexus UX.

The report is a valuable tool for people looking to understand the full impact of media coverage around the show and the sentiments surrounding the event. Graphical displays have been used to explain some of the critical factors like top media outlets and some of the most tweeted quotes.

“Agreed technology has worked wonders automating mundane media intelligence gathering tasks that were once labor intensive. But at the end of the day, humans have to enter the picture to work on the data compiled by the software and provide quality insight. While our competitors focus on fancy dashboards and flashy graphics, we rely on human review to ensure accuracy and meaningful analysis. Human insight is especially relevant in the current circumstances where fake news stories can be a credible threat to accuracy,” says Andrew Koeck, President and Co-founder of Fullintel.

A copy of the report can be downloaded using this link.

About Fullintel:
Fullintel is a human-curated media monitoring and analyst services that serves clients across the world. They help clients make informed business decisions by providing a detailed and analytical report of their media outreach efforts.