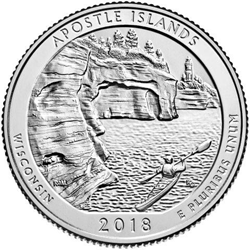 The Apostle Islands National Lakeshore quarter design marks the 100th new reverse (tails) of this coin denomination since 1932. This latest design depicts the sea caves at Devils Island with the lighthouse in the background and a kayaker paddling in the foreground. Inscriptions on the reverse are “APOSTLE ISLANDS,” “WISCONSIN,” “2018,” and “E PLURIBUS UNUM.” The obverse (heads) design depicts the 1932 restored portrait of George Washington by John Flanagan. Inscriptions are “UNITED STATES OF AMERICA,” “LIBERTY,” “IN GOD WE TRUST,” and “QUARTER DOLLAR.” A digital image is available here.

“Just as the guiding light beacons from the Devils Island lighthouse—as it has done for decades—the Apostle Islands Quarter will serve as a shining example of the inherent value of Apostle Islands National Lakeshore, and the people who protect it and frequent it…shedding light on its splendor, beauty and purpose, for future generations to follow,” said Marc Landry, Acting Associate Director of the Mint’s Numismatic and Bullion Directorate.

About the United States Mint
Congress created the United States Mint in 1792 and the Mint became part of the Department of the Treasury in 1873. As the Nation’s sole manufacturer of legal tender coinage, the Mint is responsible for producing circulating coinage for the Nation to conduct its trade and commerce. The Mint also produces numismatic products, including proof, uncirculated, and commemorative coins; Congressional Gold Medals; silver and bronze medals; and silver and gold bullion coins. Its numismatic programs are self-sustaining and operate at no cost to taxpayers.