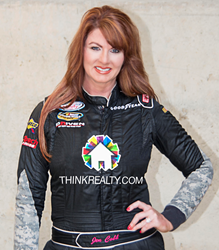 She is an excellent driver, leader, speaker and perfectly represents one of our company’s core values: living a life of purpose.

Jennifer Jo Cobb, NASCAR Camping World Truck Series driver, has secured a spot in NASCAR’s Whelen Euro Series, a 14-turn road course in Valencia, Spain. The race, April 14 and 15 at the Circuit Ricardo Tormo, marks the first European competition for the seasoned driver. She will race for the German team, Total-Racing, owned by Hubertus Heyman and Regina Riedel.

Heyman and Riedel met Cobb in 2017 at the Homestead-Miami race, where they had brought a tour group through their company, Heyman Tours. Heyman and Riedel were impressed with Cobb’s driving skill and approached her then about driving for their Total-Racing team.

“I explained that my truck efforts took most of my time and they went to work to make my racing in the NASCAR Whelen Euro Series a reality,” said Cobb. “They have secured the number 10 for me, my NASCAR Camping World Truck Series number for eight years. I’m excited to compete in my first overseas race.”

The NASCAR Whelen Euro Series uses NASCAR-inspired cars built for European tracks. The Euro series was created in 2008 by the French team, FJ Group, and in the beginning, were raced mainly on French tracks. In 2011, the series was expanded to include additional European tracks.

“We are happy to see Jen continue to excel in racing,” said Eddie Wilson, CEO of Affinity Worldwide and Think Realty, a company sponsor of Cobb’s NASCAR Camping World Truck Series team. “She is an excellent driver, leader, speaker and perfectly represents one of our company’s core values: living a life of purpose.”

Cobb has raced two road courses; she competed five times in the NASCAR Camping World Truck Series at Canadian Tire Motorsports Park and has raced in the NASCAR XFINITY Series at Elkhart Lake’s Road America in Wisconsin. She continues to hold records in NASCAR’s Camping World Truck Series for the female driver with the most starts, the highest series finish and the highest finish by a woman in any of NASCAR’s top series at Daytona International Speedway, with her sixth place NCWTS finish in 2011. Cobb is one of NASCAR’s few driver-owned teams, is the only female driver-owned team and the only full-time female driver in any of NASCAR’s top series. She launched Driven2Honor in 2011, to honor America’s female military members. More information about Cobb and Driven2Honor can be found at http://www.cobbracingteam.com.

Think Realty is a central education and information resource for new investors and seasoned professionals, providing members with valuable tools that help them to optimize their competitive advantage, succeed in the industry, achieve wealth-building goals and live a life of purpose. Think Realty is part of Affinity Worldwide. More information can be found at http://www.thinkrealty.com and http://www.affinityworldwide.com.