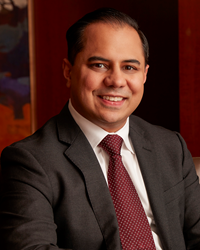 We are delighted to have him represent CaseyGerry and the next generation of AAJ leaders – as they strive to defend our civil justice system.

CaseyGerry attorney Srinivas Hanumadass has been selected to participate in the 2018 American Association for Justice’s (AAJ) Leadership Academy. AAJ, the leading plaintiff’s trial attorney organization, was previously known as the Association of Trial Lawyers of America (ATLA®).

Hanumadass is one of only 16 attorneys nationwide and the only San Diegan named to the program – an initiative of AAJ’s Diversity Committee – designed to give AAJ members the skills and techniques make them effective leaders in professional settings, within AAJ and in their communities.

“Srinivas carries on the proud tradition of CaseyGerry attorneys serving AAJ,” said David S. Casey, Jr., CaseyGerry’s managing partner and a former president of AAJ. “We are delighted to have him represent CaseyGerry and the next generation of AAJ leaders – as they strive to defend our civil justice system.”

Hanumadass, a CaseyGerry trial attorney, joined the firm in 2015. He currently is vice president and a board member of the San Diego County Bar Association and served two terms as president of the South Asian Bar Association. Additionally, he is past scholarship committee chair of Lawyers Club of San Diego, an organization dedicated to the advancement of women in the law and society. Since 2012, has volunteered with Just in Time, an organization which assists foster youth in transition.

He earned a J.D. with honors from Thomas Jefferson School of Law and graduated with a Bachelor of Science degree in History from the University of Wisconsin, Madison.

About CaseyGerry
CaseyGerry was established in 1947 and is the oldest plaintiffs' law firm in San Diego. The firm's attorneys practice in numerous areas, including serious personal injury, product liability, pharmaceutical, mass tort, aviation and class action litigation. Headquartered at 110 Laurel St. in the Banker's Hill neighborhood of San Diego, the firm also has an office in Cardiff-by-the-Sea, Calif. For more information, visit http://www.caseygerry.com.