Following a spiritual awakening in his mid-fifties, renowned eighteenth-century scientist and nobleman Emanuel Swedenborg began writing prolifically on spiritual and religious matters. Now, for the first time ever, the Swedenborg Foundation has chronologically compiled four of his earliest theological short works in a single volume as part of their New Century Edition series. 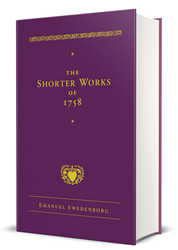 The New Century Edition of the Works of Emanuel Swedenborg presents a modern-language, scholarly translation of Swedenborg’s theological works.

One of the Swedenborg Foundation’s new titles of 2018 is now available. "The Shorter Works of 1758" presents modern translations of four of the books that Swedenborg wrote during his intense spiritual awakening. This new offering from the Swedenborg Foundation's New Century Edition series marks the first time that these writings have been made available in a single volume. The views presented in them challenge to this day traditional ideas of Christianity, Bible studies, and life within the universe and beyond.

Although Swedenborg wrote and published many books that have had a substantial influence on philosophical thought and spiritual/religious movements, readers can find a good overview of his theology in the four pieces offered in “The Shorter Works of 1758”: “New Jerusalem,” “Last Judgment,” “White Horse,” and “Other Planets.”

As a Deluxe edition publication, this extensively indexed and annotated compilation is the ultimate study guide for well-versed Swedenborgians. It includes a preface that explains how these works have been translated throughout the years, an introduction that puts the works in their historical context, and material that helps make clear obscure and often misunderstood references. Scholars, students, and spiritual seekers who are interested in the influence of mysticism during the early days of Christian reform, in Bible interpretation, and in explorations of the universe and the afterlife will equally find this collection to be appealing.

Author: Emanuel Swedenborg (1688-1772) was a Swedish nobleman widely known as a scientist, engineer, inventor, and (in later life) visionary theologian. A graduate of Uppsala University, he spent most of his career as an overseer on Sweden’s Board of Mines, and he was also a member of the Royal Swedish Academy of Sciences and an active member of the Swedish parliament. He is best known for his prolific theological writings, which he produced and published following a spiritual awakening in his mid-fifties, and for the substantial influence those works have had on philosophical thought and spiritual/religious movements in the centuries since his death.

Translator: George F. Dole holds a BA from Yale, an MA from Oxford, and a PhD from Harvard. Now professor emeritus, Dr. Dole taught ancient languages, the Bible, and theology at the Swedenborg School of Religion in Newton, Massachusetts.

Translator: Jonathan S. Rose is the series editor of the New Century Edition of the Works of Emanuel Swedenborg. Holder of a BA and an MDiv in religion and an MA and a PhD in Latin, he has worked for years in the study of Neo-Latin and in Swedenborgian research.

About the New Century Edition

The New Century Edition of the Works of Emanuel Swedenborg presents a modern-language, scholarly translation of Swedenborg’s theological works. The series’ easy-to-read style retains the dignity, variety, clarity, and gender-inclusive language of Swedenborg’s original Latin, bringing his thought to life. Introductions and annotations by eminent, international scholars place Swedenborg’s writings in their historical context and illuminate obscure references within the text, enabling readers to understand and trace Swedenborg’s influence as never before.

About the Swedenborg Foundation

The Swedenborg Foundation is a 501(c)(3) nonprofit, independent, educational organization that explores faith and spirituality based on the prolific writings left behind by eighteenth-century spiritual explorer Emanuel Swedenborg. In addition to book publishing, the Foundation also produces a highly-rated weekly webcast called "Swedenborg and Life" on the offTheLeftEye YouTube channel and generates content for multiple social media communities and two blogs for spiritual seekers and academic scholars.