“Silent Warning” from Christian Faith Publishing author Diane Quinn is a moving book that follows Jenny Warren in the aftermath of a near-fatal horse-riding accident, a life made more complicated by the fact that her husband Danny has gone missing, her home ranch is targeted by predatory developers, she encounters another freak accident in the barn, and finds out—too late—that two men are set out to kill her. 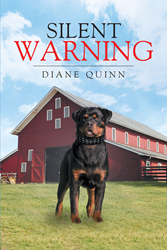 “Silent Warning”: a riveting story about a young woman’s attempt at saving her own life after being given a second chance at it. “Silent Warning” is the creation of Diane Quinn, a published author whose skillful introspection permeates her prose and brings Jenny Warren’s complicated world to life.

Diane shares, “Her recent near-death experience however had caused her to re-examine her life and consider what purpose it should have. She had read about people who experienced a near-fatal experience and who claimed that their lives were forever changed. She could understand that. Receiving such a vivid wakeup reminder that life was short and very uncertain would certainly prompt a reevaluation of a person’s priorities.

If her escape was meant to motivate her and God had a plan for her, she would definitely need more guidance. For Jenny the problem was how a person goes about changing their life and priorities. Was it supposed to be instantly or by degrees? Jenny rationalized that for her it would have to be by degrees since she had responsibilities that she couldn’t ignore. There was no escaping the fact that she had been very lucky, and she supposed that the miracle that allowed her to escape unhurt would need more evaluation. She believed that she was given a second chance at life. Unfortunately she wasn’t sure exactly what she was supposed to do with that.”

Published by Christian Faith Publishing, Diane Quinn’s new book delves gracefully into the timeless premise of discovering life’s purpose when events—both the mundane and the life-threatening, all acting as “silent warnings”—make it all that much clearer that time is a fleeting treasure to be protected.

For additional information or inquiries about “Silent Warning”, contact the Christian Faith Publishing media department at 866-554-0919.