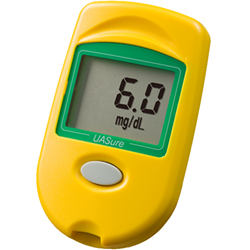 The UASure meter gives patients the knowledge they need to take personal control of their uric acid levels.

UASure USA announced today that they will begin selling uric acid meters directly to the public in the United States. While home testing is common for blood pressure and glucose monitors, patients with gout have traditionally needed to go to a lab to have blood drawn, a process that includes waiting several days to receive results. Effective immediately, a home-based, handheld uric-acid meter is available in the United States. Results are obtained in 30 seconds, with a level of accuracy comparable to results obtained from a laboratory.*

Uric acid monitors have been available in other countries for several years, but have not been available in the United States until now. Purchasing monitors overseas has been problematic due to the temperature-sensitive nature of uric acid test strips which deteriorate during transit, leading to unreliable results. UASure USA stores all products in their temperature-controlled facilities, and domestic shipping insures quick delivery of fresh products.

Monitoring uric acid levels at home can greatly benefit people with gout or who are at risk of getting the disease. Frequent and convenient testing allows patients to track changes over time and possibly take steps to prevent a gout attack if dangerous levels are reached. Additionally, users can see how their bodies react to various foods and liquids by taking readings before and after eating or drinking. The UASure meter gives patients the knowledge they need to take personal control of their uric acid levels.

About UASure: UASure invented the market's first handheld blood uric acid meter in 2001. Trusted worldwide, the UASure meter's precision and ease of use have made it the "gold standard" in portable uric acid testing.

*Independent laboratories in Hamburg, Germany and Postfach, Switzerland have found the UASure meter to be highly accurate compared with results from the industry-standard EPAC 6140 tester.