So You've Made A Music Video: Now What? Andy Gesner at HIP Video Promo has the Answers 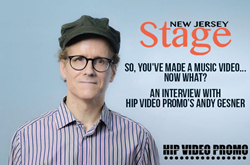 Nearly two decades in the game, HIP has proven their strategies for music video promotion, to increase views on YouTube, build their brand on social media, and help artists create and grow a dedicated fanbase.

Read the article here: New Jersey Stage: So You've Made A Video... Now What?

It’s a given in 2018 that the music industry is always evolving. Just as it seems clear that things are the way they are, something shifts on the musical landscape. Staying on top – and ahead – of trends is as important as ever, but no matter how things change, one thing remains the same: an artist’s music video, now more than ever, is their most powerful and potent piece of marketing currency!

With advances in smartphone cameras, video technology, and the ease of sharing online, getting in the game is easier than ever before. But with all these constant changes and updates, it’s become increasingly crucial for artists to have someone to help them navigate the industry – and that’s where HIP Video Promo comes in! HIP Video Promo is the international leader in music video promotion and social media marketing, with eighteen years of experience promoting over 3000 music videos. They have championed debut videos by The Lumineers, Sia, Maroon 5, Paramore, Bon Iver, She & Him and 30 Second To Mars

In this ever-shifting musical mosiac, how have things changed at HIP, you ask? Gary Wien at New Jersey Stage recently interviewed HIP Video Promo owner and president Andy Gesner, who has all the answers. In this article, Gesner talks about not only the history of HIP, but how things have grown and evolved in recent years.

Since the year 2000, HIP Video Promo has helped connect thousands of artists across all genres with millions of viewers and new fans through their music video promotion strategies. Recent years have seen expansion into social media marketing and YouTube promotion and now, HIP has dove in headfirst into the world of Spotify promotion too! They have spent countless hours building relationships with top curated Spotify playlisters with large followings, to help their clients increase streams and gain new fans across the globe!

Nearly two decades in the game, HIP has proven their strategies for music video promotion, to increase views on YouTube, build their brand on social media, and help artists create and grow a dedicated fanbase. With over 3000 music videos promoted, their strategies translate not only to Instagram, Twitter, and SoundCloud, but to Spotify, BandCamp, and other content-sharing websites to give musicians a crucial advantage! HIP is there to help artists of all sizes promote their visual content; whether they’re an established star or a brand new act, they receive the same attention to detail and personalized campaign for video promotion, social media marketing, and Spotify promotion.

HIP has had the privilege of spreading the word about some true legends, and they’ve also helped many new and young artists explode to a mass audience for the first time – and there’s nothing more rewarding than being a part of the team that helps a promising act get their big break.

What will the future hold for the music industry? That’s hard to say – but if one thing is for sure, it’s that HIP will be there adapting to new trends, and they’ll be ready to bring the same dedication and belief in their clients to reach higher and achieve more.

Read the article here: New Jersey Stage: So You've Made A Video... Now What?