Ethan Wacker, the 15-year-old actor from the Disney show Bizaardvark, will sign autographs at a meet, greet and game event April 14 in Lehi, Utah. 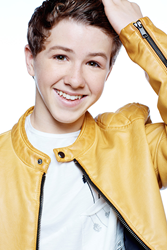 Ethan Wacker, the actor who plays “Bernie” on Disney’s television show “Bizaardvark,” will greet fans at a gaming party at the Outlets at Traverse Mountain on Saturday, April 14, from noon to 5 p.m.

All are invited to participate in the free event. The day's festivities will include selfie booths, virtual reality tours, gaming trucks, live entertainment, superhero appearances, and the meet-and-greet with Wacker. He will greet fans and sign autographs from 1-3 p.m.

A series regular on “Bizaardvark,” Wacker began acting at age 12 after participating in open auditions and earning a place in an acting program in Los Angeles. He won seven awards at the acting camp, and has subsequently appeared on several shows including “Jimmy Kimmel Live,” “Miles from Tomorrowland,” “K.C. Undercover” and “Hawaii Five-0.”