The Last Motorcycle on Earth set in a world determined to outlaw petroleum and human-driven vehicles. 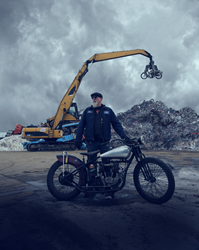 The plot of this show is every biker’s worst nightmare.

Motorcycles are outlawed. Gasoline is $20 per gallon. Self-driving cars are becoming dominant. Silicon Valley tech firms and the U.S. Government have collaborated to push society toward a fully-autonomous transportation system and motorcycles are an easy first target in the campaign to ban human-operated vehicles. This is the basis for the first season of The Last Motorcycle on Earth, directed by filmmaker, Eric Ristau. The series is co-written and produced by Ristau, wife and partner, Geneva Ristau and veteran motorcycle builder Neil “Morto” Olson.

“There is a culture war on the horizon between Americans who want to drive their own vehicles and those who want to be driven by a robot,” says director Eric Ristau. “On an engineering level, motorcycles pose enormous challenges to autonomous vehicle technology. We wanted to envision a future where motorcycles have been banned and suddenly every rider is an outlaw.”

The first hour-long episode is complete and the second two are currently in production. The filmmakers have drawn on the vintage motorcycling community for talent, locations and the motorcycles that populate each episode. Due to the costs of post-production and visual effects, an IndieGogo campaign was launched this month to raise $145,000 to complete the first three episodes. The campaign is currently live at http://www.lastmotorcycle.com and ends May 13th.

“The independence of motorcyclists to ride where they want, when they want is ingrained in their DNA,” says Olson, a lifelong motorcyclist. “The idea of someday seeing that right disappear due to technological shifts in our transportation system gave us endless story ideas. The plot of this show is every biker’s worst nightmare.”

The series will stream on major video-on-demand platforms and expects general release in early 2019.