All markets experienced a small decrease in either unit sales or dollar volume, or both, versus the first quarter of 2017 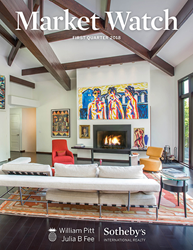 A report detailing market results for the first quarter of 2018 in Fairfield and Litchfield Counties and the Shoreline in Connecticut, the Berkshires in Massachusetts, and Westchester County, New York, has just been released by William Pitt and Julia B. Fee Sotheby’s International Realty, the company announced today.

The report found all markets the company serves experiencing somewhat lower sales versus the first quarter last year. While the declines were not enormous, they were consistent. Westchester County was down by 6% in unit sales and 4% in dollar volume, with the southern county seeing a decrease of 7% in units and 3% in volume, and the northern county down 4% in units and 8% in volume. In Connecticut, Fairfield County saw unit sales decreasing by 2% and dollar volume by 3%, Litchfield County had unit sales about even and dollar volume declining 5%, and the Shoreline region of New Haven, Middlesex and New London counties saw unit sales dipping 5% and volume a slight 1%. In the Berkshires, Mass., unit sales slid 14% while dollar volume was flat.

Noting that it has been several years since the last time there was an overall decline in sales year over year, the report concluded that the passage of the new tax bill at the end of 2017 helped to prompt a pause in buyer activity during the fourth quarter, reflected in the lower rate of closings in the first quarter. In its analysis the report suggested that the new bill may have spread a degree of uncertainty among consumers, particularly in states where income and property taxes may be most affected.

Yet at the same time, economic indicators point to an ongoing strong foundation for the real estate market. These include the GDP, which saw the largest growth in consumer spending in three years in the fourth quarter; low unemployment and a growing job market; interest rates remaining low; and the stock market, while fluctuating, still standing high. Consumer confidence, historically the key leverage point in determining the outlook on real estate, remains at elevated levels with a March reading of 127.7 (1985=100) after a historic 18-year high of 130.0 in February, according to the Conference Board Consumer Confidence Index®.

“With so much positive news on the economic front, we would expect to observe a robust real estate marketplace. We do feel optimistic that high consumer confidence will override concerns associated with the tax bill going forward, though at the same time we cannot predict the future,” said Paul Breunich, President and Chief Executive Officer of William Pitt and Julia B. Fee Sotheby’s International Realty. “In recent months we’ve seen many in our industry speculate in the media on how tax reform will impact the real estate market this year, but we feel it is too soon to tell. We stand by the position that it would be irresponsible to draw firm conclusions so soon after the signing of the new law.”