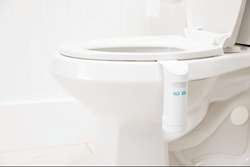 The team behind LooLoo designed their sleek, automatic toilet freshener in the hopes of representing a complete revolution in how consumers use toilets today. After just six hours on Kickstarter, the campaign reached its $10,000 funding goal and now, with 30 days left, the campaign has been triple-funded and shows no signs of slowing down.

The concept of LooLoo is simple. The device works by clipping onto the inside of a toilet and uses infrared technology to sense the heat of the body as a user sits down. LooLoo then sprays a thin film of proprietary essential oils on the water inside the toilet. The fragrance blend not only traps the odor under the water, but also counteracts the odor by absorbing all smelly nitrate molecules.

The Co-founder of LooLoo, Taylor Wood, has spent three months building toilets for schools and villages in rural areas of Uganda. Wood, along with the rest of the LooLoo team, has pledged to donate a percentage of the company’s revenue to solving the problematic sanitary issues in developing countries.

“We feel passionate about making this world better for not just those who buy LooLoo, but for everyone,” Woods explained.

LooLoo comes equipped with LED lights, in nine different colors, designed to softly illuminate a toilet. Over 400 backers have taken advantage of pre-ordering LooLoo at a 45% discount on Kickstarter. The innovative device is still available for a limited time, and pre-orders can be placed at http://pr.go2.fund/looloo.

About LooLoo
LooLoo is a product of Homemation LLC, a Salt Lake City-based innovation company. Taylor Wood, the Co-founder and Inventor of LooLoo, was previously with Deloitte Consulting- Strategy & Operations, where he worked with an array of fortune 500 companies. Bryce Johnson, a Co-founder of LooLoo, was previously CEO of Zarbee’s Naturals, where he helped build the Number-1 pediatrician-recommended cough syrup. LooLoo not only cares about freshening toilets, but also about improving the world’s sanitation. For that reason, a portion of the company’s revenue is dedicated to solving sanitation problems in developing countries. For more information, visit https://looloo.us/.