Harvey Meredith challenges facets of the Bible from misconceptions and revisions 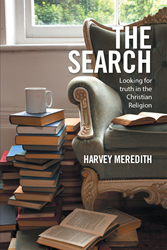 Deconstructing aspects of the Bible and religious teachings, “The Search: Looking for Truth in the Christian Religion” by Harvey Meredith seeks to dispel certain myths that churches consider to be facts.

Examples in the book include how Jesus was not born in Bethlehem, there was no such person as Joseph, and Peter was not the first pope, nor was he ever in Rome. The Christian Church anointed Peter as the mythical head of the new religion almost 150 years after the Crucifixion.

In apocryphal texts, Mary Magdalene is portrayed as a visionary and leader of the early movement, the one whom Jesus loved more than he loved the other disciples.

Meredith recognizes that the religious hierarchy is unaccepting of comments that point to myths or untruths but wishes to reach a wide audience and raise awareness.

“I was reared in a strict Catholic family where church attendance and daily prayer was adamant and the teaching of one religion dominated our lives,” said Meredith. “A lifetime of questioning these religious doctrines culminated in the writing of this book.”

For fans of “The Da Vinci Code” and similar books, “The Search: Looking for Truth in the Christian Religion” is a text that sheds light on the misconceptions and revisions made by church authorities within the past 2,000 years.

About the author
Harvey Meredith was born in the depths of the Great Depression and grew up in a family of 13 children. He was trained as a research scientist and applied his training and experience in compiling this writing. Meredith received a Ph.D. in soil physics from Purdue University. He is a retired Air Force Civil Engineer, attaining the rank of Colonel. Meredith is also a graduate of the Air Command and Staff College, Industrial College of the Armed Forces, and the Air War College. He served as regional director for the National Fertilizer Development Center and was adjunct professor, University of Minnesota, and a member of the University of Minnesota graduate faculty. To learn more about the author, please visit http://www.harveymeredith.com.