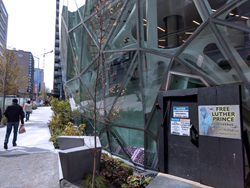 “This wild, funny, ridiculous and yet deeply serious novel imagines a near future in which class, commerce, race, technology, and our ever evolving social politics intersect, and explode." — Phil Klay, National Book Award Winner and author of Redeployment.

As Amazon searches for its HQ2 and prepares to launch their drone delivery service nationwide, Alephactory Press launches DELIVER US, a provocative and prescient novel in which Amazon debuts their Prime Air service in Detroit. The novel is being promoted through an unorthodox campaign featuring street art in Detroit, Seattle, and ten other cities under consideration for HQ2, and through the smuggling of promotional copies into the Amazon campus in Seattle.

Comically absurd, yet anchored in reality, DELIVER US courts controversy on several levels, telling the story of a black social-media activist leading a campaign against Amazon, whose new fleet of drones offers rebirth to the blighted city while threatening to magnify existing racial inequalities.

The guerrilla media campaign, carried out by anonymous conspirators, mirrors plot elements of the novel and aligns with the risky attitude that spawned the book. The decision to put Jeff Bezos and Amazon employees into the novel, without changing their names, is a gamble most publishers would avoid, given Amazon's monopolistic power over the industry, which they've previously flexed in their dispute with Hachette.

The novel features cover art by renowned Detroit street artist Eno Laget and is by written by Christopher Robinson and Gavin Kovite, authors of the critically acclaimed WAR OF THE ENCYCLOPAEDISTS (Scribner, 2015), which Michiko Kakutani of The New York Times called “Spirited...a captivating coming-of-age novel that is, by turns, funny, and sad, and elegiac.”

In accord with Robinson & Kovite’s commitment to social justice, they will be donating hundreds of copies of DELIVER US to Detroit schools, libraries, and community centers.

DELIVER US (ISBN 9780999477403) is available for purchase in independent bookstores, and directly from Alephactory Press, the preferred channel, especially if Amazon retaliates.

Alephactory Press, based in Seattle, is an independent publishing house and literary collective with a simple mission: to publish the strange, prescient, unsettling, controversial, and hybrid. More information at http://www.alephactory.com