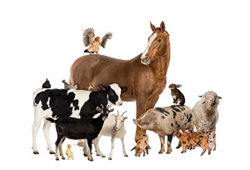 The drive to address agricultural animal welfare increases as the demand for food of animal origins correspondingly grows. A major emerging challenge is the continuous need to meet animal protein demands while simultaneously protecting animal welfare and developing broadly sustainable production systems. Large-scale, intensive systems predominate production animal agriculture in the United States. These systems continue to generate concerns and public debates about the treatment of farm animals, the conceptions of sustainability, the social responsibility of food production systems, and the safety and quality of food.

This report, in comparison to the 1997 CAST Task Force Report, shows a growing emphasis on animal welfare regulations. The priorities, state of the science, challenges, and approaches to addressing the topic have also evolved considerably. Increased collaboration has occurred between scientists and philosophers to address agricultural bioethics in an effort to facilitate conflict resolution.

Led by Task Force Cochairs Candace Croney, Joy Mench, and William Muir, the authors recognize this issue is multifaceted and involves consideration of not only the biology and psychology of animals, but also people’s ethical concerns. Addressing the scientific aspects of animal welfare is challenging and complicated. This paper demonstrates the need for strategic engagement related to ethical concerns when communicating with a wide range of interested stakeholders—while also remembering the importance of keeping differing perceptions and levels of knowledge in consideration.

This task force report addresses the issue by examining these key topics:

Throughout the past 21 years, livestock and poultry industries have felt pressure to move toward alternative production practices. As the authors point out, “It is imperative to understand which systems and practices may optimize economic efficiencies in conjunction with ensuring positive animal welfare outcomes and public support of animal agriculture.” Due to the complexity of the issue, the scientific community continues to strive for a consensus that provides a framework for scientific and ethical analysis.

This CAST Task Force Report (R 143) and its companion Ag quickCAST are available online at the CAST website, along with many of CAST’s other scientific publications.

CAST is an international consortium of scientific and professional societies, companies, and nonprofit organizations. Through its network of experts, CAST assembles, interprets, and communicates credible, balanced, science-based information to policymakers, the media, the private sector, and the public.
http://www.cast-science.org