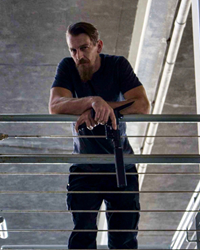 Jason Johnson is the real deal – an American-made original with unapologetic swagger.

Households across America will soon be introduced to one of the world’s most formidable combat knife masters, as Jason Johnson makes his broadcast debut on HISTORY Channel’s new series, 'Forged in Fire: Knife or Death.'

An Omaha native, Jason Johnson is a champion knife thrower, blade design consultant, and educator who is best known for his unconventional, yet remarkably effective, combat knife throwing skills. A fast-rising personality on Instagram (@ProKnifeThrower), Johnson’s viral video clips showcasing his supernatural talents with blades caught the attention of show producers, leading to his casting in the highly anticipated spinoff of the popular 'Forged in Fire' television series.

“Jason Johnson is the real deal – an American-made original who is respectful of the tradition of his craft and peers, while pushing past conventional limits with an unapologetic swagger,” says Nashville-based entertainment authority, Ken Lingad.

'Forged in Fire: Knife of Death' collects the world’s greatest bladesmiths, martial artists, and knife experts to compete in an assortment of different blade challenges where the blade-wielding experts will cut, stab, slice, and chop their way through obstacles like blocks of ice, ropes, and flying projectiles over two unique courses on their way to a cash grand prize. The show will be hosted by WWE Hall of Famer Bill Goldberg, Special Forces veteran Tu Lam, and two-time Forged in Fire Champion Travis Wuertz.

Members of the press and bloggers with credentials may request interviews with Jason Johnson via email to Press(at)1680(dot)co. Please visit Johnson’s official website RealJasonJohnson.com for more information, hi-definition video, photos, the latest news, and more.

An Omaha, Nebraska native, Jason Johnson lives a life in pursuit of the balance between his craft and philosophy. A diligent student of martial arts history, lifeways, and combat systems, Jason Johnson is the real deal - an American-made original blending generations of tradition and unapologetic swagger.

Jason Johnson has rapidly earned accolades and respect from peers and contemporaries, alike, and is in-demand for seminars and masterclasses worldwide. He is professionally represented by Ken Lingad for 1680Entertainment.