Liberty University graduate Katarina Bouton (’17) has received a Fulbright U.S. Student Program award from the U.S. Department of State and the J. William Fulbright Foreign Scholarship Board to teach English in Asturias, Spain. 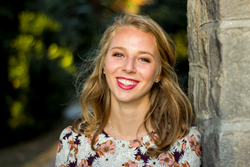 “The prospect of uniting my desired profession with my fascination with the Spanish culture through a Fulbright English Teaching Assistantship excites me profoundly,” Katarina Bouton said. "I plan to help equip students to become globally competitive citizens."

Liberty University graduate Katarina Bouton (’17) has received a Fulbright U.S. Student Program award from the U.S. Department of State and the J. William Fulbright Foreign Scholarship Board to teach English in Asturias, Spain.

The Fulbright Program, which operates in over 160 countries, is the flagship international educational exchange program sponsored by the U.S. government and is designed to build lasting connections between the people of the United States and of other countries. Recipients are selected on the basis of academic and professional achievement as well as record of service and leadership potential in their respective fields.

Bouton graduated with a Bachelor of Arts in Teaching English as a Second Language (TESL) with Teacher Licensure. She was a student-athlete on the Liberty Flames Athletics Track & Field and Cross Country teams and was voted to the 2016-17 CoSIDA Academic All-District III team as a senior.

While at Liberty, Bouton developed an interest in teaching English overseas, specifically in Spain. Though she felt that a Fulbright grant was out of her reach, she received “God’s obvious direction to apply for a Fulbright grant to Spain” after joining an LU Send trip to Guatemala, which she said helped her improve her Spanish proficiency.

Bouton will soon learn from Spain’s Commission for Cultural, Educational and Scientific Exchange the school where she will be placed for teaching. Her Fulbright grant is for nine months, beginning this fall.

“The prospect of uniting my desired profession with my fascination with the Spanish culture through a Fulbright English Teaching Assistantship excites me profoundly,” she said. “I plan to help equip students to become globally competitive citizens and increase their employment opportunities. This experience will also expand my repertoire of teaching methods, shaping me into a highly effective cross-cultural educator.”

She also plans to share her passion for running by establishing an after-school distance running club for middle or high school students.

A native of Dallas, Texas, Bouton married in March and resides in Sioux Falls, South Dakota, where she serves as a substitute teacher at the Elementary English Immersion Center. She plans to continue teaching at the center, which serves a number of refugees and non-native English speakers. Sioux Falls is a rapidly growing refugee resettlement site, and Bouton has a passion to help further their opportunities in life.

“It is very rewarding work,” Bouton said, noting she has a summer job lined up at the center.

Bouton said it was at Liberty where her passion developed and cultivated.

“That vision only flourished as I took practicums and classes in linguistics, TESL, and education,” she said. “Through Fulbright, I will be better equipped to guide these students through the rigors of acquiring both a second language and a knowledge of U.S. culture.”

Liberty has had Fulbright recipients in the past, including a professor who received a Fulbright grant to teach in Romania and another professor who conducted research on health issues in Ireland, but Bouton is the first student applicant through the newly established Liberty University Fulbright Committee to have an application accepted. Liberty had five Fulbright semifinalist candidates this year.

“I worked very hard for months on my application and essays, writing and rewriting numerous times under the direction of Edna Udobong (Liberty’s Fulbright program advisor and scholar liaison) and the Liberty Fulbright committee, and poring over every word I’d written hundreds of times,” Bouton said. “I stayed up late to meet deadlines. I exchanged what seemed like a thousand emails with Edna and other professors. I was discouraged many times and cried some, but I knew this was something I’d see through to the end — giving up was never an option. I had a feeling that if I gave it everything, God would do something big.”

About Liberty University
Liberty University, founded in 1971, is the largest private, nonprofit university in the nation and the largest university in Virginia. Located near the Blue Ridge Mountains on more than 7,000 acres in Lynchburg, Va., Liberty offers more than 550 unique programs of study from the certificate to the doctoral level. More than 250 programs are offered online. Liberty's mission is to train Champions for Christ with the values, knowledge, and skills essential for impacting tomorrow's world.