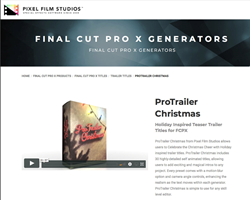 "Bring a blast of the holidays in spectacular trailer form to any Final Cut Pro X project!"

ProTrailer Christmas is an FCPX Generator tool. FCPX users simply select the preset the want to use, and customize it using the intuitive controls. Final Cut users locate all controls in the inspector window while using the generator. This plugin utilizes all of the new FCPX 3d text controls, allowing the user to fully edit each title. ProTrailer Christmas is simple to use, built with any skill level FCPX user in mind.