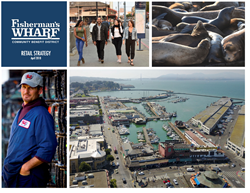 The Fisherman’s Wharf Community Benefit District (FWCBD) today unveiled a new district retail strategy for the 30-block historic waterfront neighborhood. The strategy is a renewed effort to strengthen the district’s commercial mix, celebrate the area’s fishing industry, and create new interest in the area from both local residents and visitors. The comprehensive document focuses on business, entertainment, appearance, safety, marketing, and the public realm.

For over 100 years, Fisherman’s Wharf has been a working commercial fishing hub. Today, the area has evolved into an internationally recognized waterfront leisure destination that attracts 16.4 million visitors annually. Since 2010, more than $300 million in private and public investments have helped improve Fisherman’s Wharf. Most notably, the City of San Francisco invested over $12 million redesigning two blocks of the area’s main thoroughfare, Jefferson Street. Since that time, the area has undergone a renaissance.

The 70-page retail strategy document outlines how to maintain the momentum of the Wharf renaissance, while also preserving the area’s unique historical ties and improving the iconic waterfront district. The five major goals of the strategy are:

A specific objective of the strategy is to advocate for the second phase of the Jefferson Street redesign project. The project is currently shovel-ready. The plan calls for wider sidewalks, increased lighting, better vehicle circulation, and the enhancement of public plazas at key intersections. The City of San Francisco is currently seeking funding and is awaiting a state grant that would cover half the cost of construction. Construction could begin as early as 2019.

In addition to an improved public realm, the retail strategy group envisions nightlife and year-round events along with well-curated retail offerings including a burgeoning arts district and world-class attractions. “This diverse mix will ensure that a vibrant pulse is maintained throughout the district,” said Retail Strategy Task Force Chair, Sina von Reitzenstein, of PIER 39. “The ideal balance of dining, shopping, fun, and entertainment will make the Wharf a memorable place for all to enjoy.”

The retail strategy project has already encouraged better communication between property owners, managers, brokers, and merchants and has inspired renewed interest in modernizing the retail mix and upgrading properties. Façade overhauls are underway or have been recently completed on Jefferson, Taylor and Beach streets. Jefferson Street newcomers include Supreme Crab Restaurant, Buckhorn Grill, and San Francisco favorite, Lefty O’Doul’s, which will be relocating from Union Square. New PIER 39 tenants for 2018 will include The Flyer, The Plunge, Wahlburgers, and Build a Bear Workshop. Jamestown Properties, managers of Ghirardelli Square, are infusing major local appeal into the area with the district’s first-ever brewery/restaurant, San Francisco Brewing Co. (opening April 27, 2018), which will transform a 12,000 square foot space in the former chocolate factory; Palette, a dim sum restaurant from the team behind Koi Palace, Pico Mexican restaurant, Subpar, an indoor 18-hole mini golf course, and The Cheese School of San Francisco.

The process of creating the retail strategy and accompanying document was a year-long collaborative effort between the FWCBD, Seifel Consulting, and the Retail Strategy Task Force, which included 15 property and business owners from the area. The project was partially funded by a grant from the Mayor’s Office of Economic and Work Force Development. The document can be found at FWRetailStrategy.com or this link.

ABOUT THE FISHERMAN’S WHARF COMMUNITY BENEFIT DISTRICT:
The Fisherman’s Wharf Community Benefit District (FWCBD.com), a nonprofit organization, was founded in November of 2005 by the business and property owners of the San Francisco neighborhood. The district is funded through an annual assessment for 15 years from the property owners. The purpose of the Fisherman’s Wharf Community Benefit District is to preserve and enhance its vast San Francisco waterfront landscape and multi-cultural heritage while integrating modern efficiencies to enrich the experience of visitors from both near and far. VisitFishermansWharf.com