THEY’RE AMONG US provides an intriguing theory into mankind's technological advances, and is filled with enough action and conspiracy to keep readers on the edge of their seats 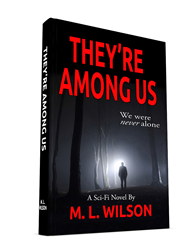 THE GREATEST CONSPIRACY IN HUMAN HISTORY.

This is what THEY’RE AMONG US uncovers. This conspiracy novel is filled with twists and turns that rival those of THE X-FILES.

NYPD detectives Kenneth Bishop and Alan Justice uncover the truth about two warring alien races on Earth. Working with medical examiner Dr. Laura Saunders, the three step into peril as one alien faction is conspiring to conquer Earth. THEY’RE AMONG US is the story about how the world’s governments make disastrous trades with the aliens in order to further their countries' quest for global dominance, and how three individuals, with secrets of their own, uncover the truth and become targets in a galactic conflict that could determine the future of Earth. How can the three survive when their deaths are of the highest priority for a devious alien race that has the backing of the world’s governments?

THEY’RE AMONG US is part one of a two part series and is available at http://www.mlwilsonauthor.com and on Amazon.