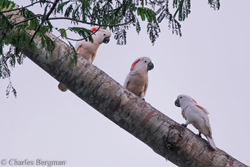 "The unsustainable parrot trade is leading to the decline of species in Southeast Asia. In tackling the trade, IPP, together with other wildlife agencies, has dedicated itself to the rescue, rehabilitation and release of parrot species back into their native ranges of Indonesia.”

“Earth Day is a global event when people to come together and protect our planet, forests and wildlife,” explains Bonnie Zimmermann, Executive Director, Indonesian Parrot Project. “In the case of the Indonesian Parrot Project, we see an alarming decline in the populations of endangered cockatoos and parrots due to habitat loss, extreme poverty of the local communities, and the illegal trade. Numbers show that over 12,000 parrots are trapped for the illegal trade each year in Maluku alone and the mortality rate is extremely high. We have been working ‘on the ground’ in Indonesia since 2001 and currently are focusing our efforts on the Salmon-crested Cockatoo (Cacatua moluccensis), the White Cockatoo (Cacatua alba) and the Abbotti Cockatoo (Cacatua sulphurea abbotti). The wild population of the Abbotti Cockatoo is down to 22 birds and is on the brink of extinction. Our documentary focuses on these issues,” she adds.

The documentary will be dedicated to Dr. Stewart Metz, the founder of IPP, and his contributions to the conservation and protection of critically endangered parrots and cockatoos. The film will be produced by Wildlife Messengers, a U.S.-based 501(c)(3) nonprofit organization, in close collaboration with IPP. WM specializes in films focusing on wildlife conservation. For the last 8 years the scientists and filmmakers who founded WM have been filming conservation projects in remote parts of the world, including Kenya, Cape York of Australia, the tropical rainforests of the Democratic Republic of the Congo and Peru.

Footage was shot in late 2017 and includes interviews with IPP team members, local community stakeholders, a tribe of former head-hunters who eat cockatoos as part of their spirit culture, ex-poachers, tourists and scientists. Additional footage features parrots in the wild, confiscations of birds from the illegal trade, bird markets, local culture and eco-tourism.

Along with the sneak preview of the trailer, a crowd-funding campaign will also be launched on Earth Day on GoFundMe to raise $15,800 for post-production and distribution.

“We expect enormous interest in our cause,” Zimmermann continues. “Any funds raised greater than the amount needed to produce the film will support the ongoing efforts of the IPP,” she notes.

IPP collaborator Dr. Jessica Lee, Senior Manager, Conservation, Research and Veterinary Services, Wildlife Reserves Singapore adds “The unsustainable parrot trade is leading to the decline of species in Southeast Asia. In tackling the trade, IPP, together with other wildlife agencies, has dedicated itself to the rescue, rehabilitation and release of parrot species back into their native ranges of Indonesia.”

Indonesia’s rainforests are home to some of the highest levels of biological diversity in the world. Many sources credit Indonesia as the most species-rich country on earth. Spread over 18,000 islands, Indonesia contains the world’s third largest area of rainforest after the Amazon and Africa’s Congo Basin. It is also culturally diverse with a mix of over 600 dialects spoken and is a mix of Muslim, Christian, Hindu and tribal cultures.

Sadly, the rapid loss of Indonesia’s biologically wealthy rainforests is driving many species to the very edge of survival. Only decisive action and a paradigm shift towards meaningful conservation commitments by industry and the Indonesian government will prevent a catastrophic epidemic of extinctions in the coming decades.

Incredibly, with just 1% of the Earth’s land area, Indonesia’s rainforest contains 10% of the world’s known plant species, 12% of mammal species - including endangered orangutans and critically endangered Sumatran tigers and rhinos - and 17% of critically endangered birds and parrots. And there is still much to be discovered. The Indonesian Ministry of the Environment estimates that more than half of Indonesia’s species are still unrecorded.

Dr. Stewart Metz with a young bird he rescued from the Bird MarketIt is essential to work with the local communities in parrot rich areas of Indonesia to implement conservation programs.