Monster Energy congratulates crowd favorite Michael Chandler on his victory against Brandon Girtz by technical submission on Friday night at Bellator 197 at The Family Arena in St. Charles, MO, near St. Louis. 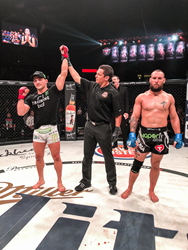 Monster Energy congratulates crowd favorite Michael Chandler on his victory against Brandon Girtz by technical submission on Friday night at Bellator 197 at The Family Arena in St. Charles, MO, near St. Louis. The main card event aired on Paramount Network.

Chandler (18-4 MMA, 15-4 BMMA) firmly established himself as the number-one contender for the lightweight championship by making Bellator history when he set a new record with his 15th Bellator victory, making him the winningest fighter in the promotion’s history. Chandler won with a first round submission of replacement opponent Girtz, who stepped up on a month’s notice when Brent Primus, who was set for a rematch and his first title defense, was forced to withdraw from the fight due to injury.

Chandler also set records for the most stoppage wins (11) and tied the record for most submission wins (6).

The first round started with both fighters landing shots. The fight was stopped after Chandler got hit with an illegal blow to the cup and again when Chandler inadvertently poked Girtz in the eye. As the fight resumed Girtz went in for some punching combos, but Chandler went in for the takedown dragging Girtz away from the cage.

Unfortunately for Girtz, Chandler was a man on a mission slamming his opponent into a big takedown that separated Girtz’s shoulder before locking him in a beautiful arm-triangle choke that put Girtz to sleep at the 4:00 of round 1.

Chandler is next in line for a shot at the lightweight title with a possible rematch with Primus.