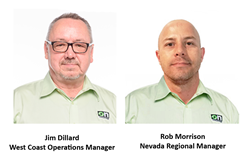 On Location, a nationwide provider of labor and management services for exhibits, events and environments, announces the expansion of its West Coast operations to support business growth and enhance its level of service with even greater client focus. The newly created position of West Coast Operations Manager will be held by long-time company manager, Jim Dillard, and new hire, Rob Morrison will join the team as Regional Manager-Nevada Region. The West Coast operations also includes from New Orleans to Southern California and all trade show sites in between.

Jim joined On Location in 2009 as a traveling Lead Man for many of the company’s major accounts before being promoted to the Nevada Regional manager in 2015. "Since I have known Jim, he has risen to every challenge with passion and a commitment to excellence," said Michael Mulry, General Manager. In this newly created role of West Coast Operations Manager, Jim will oversee the On Location west coast operations which spans from Louisiana and everything west of it. He will work closely with a team of regional managers and traveling lead men to ensure client successes. Ron Bailey, National Operations Manager added, "With our continued growth, we felt a need to further support our Regional Managers. Having held many positions at On Location, Jim understands the day-to-day operations well and will be a huge asset to our operational leadership team.”

In addition, On Location has hired Rob Morrison as Regional Manager-Nevada Region. His responsibilities will be to ensure customer satisfaction in his region through effective recruitment, scheduling and allocation of resources. A seasoned trade show professional, Rob brings more than 14 years’ experience to the team. He grew up in the exhibit industry, working in Southern California on the trade show floor beside his father. Rob moved to Las Vegas and continued to work as a Lead Man before becoming a manager with MC2 and most recently, Expo Pros.

“This is an exciting time for On Location,” Mulry added. “We are fortunate to be growing and recognize the importance of maintaining the high level of service our clients have come to expect. It is rewarding to promote Jim and we are excited to be developing this new role as a model we are we foresee implementing on the east coast.” He went on to say, "Rob brings valuable experience to our company and will look to further boost the team Jim has built in the Nevada region."

About On Location:
For more than 25 years, On Location has provided nationwide labor and management services for exhibits, events and environments that deliver a positive Return on Experience (ROE) for its customers - on time and on budget – throughout the country and around the world. As a leading exhibitor assigned contractor (EAC), the company recruits and trains highly experienced employees to become an extension of clients’ teams, developing a plan for their unique needs. The result is a true client centric approach and business model to provide nationwide continuity of hands-on service before, during and after each project. For more information, visit: onlocationind.com.