Brother Clifton’s Newly Released “Justice and Judgment, Mercy and Truth” is an Enlightening Reminder of God’s Law and Grace—and Also a Final Warning for Christians.

“Justice and Judgment, Mercy and Truth” from Christian Faith Publishing author Brother Clifton is a stirring and audacious work that revisits the spiritual setup of law and grace as the world has it today, beginning with God’s kingdom of heaven, Lucifer’s rebellion, the law set down on earth for mankind, and finally Jesus’s perfect sacrifice, through which the law is fulfilled, and whose grace cannot be fully appreciated without the law. 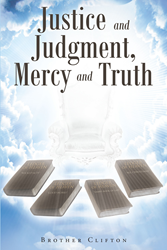 “Justice and Judgment, Mercy and Truth”: a bold and detailed reminder of the law’s necessity for the appreciation of grace. “Justice and Judgment, Mercy and Truth” is the creation of published author Brother Clifton, who writes from Jacksonville, Florida, and welcomes readers’ requests for information by writing to his address found at the back of the book.

The author shares, “For six thousand years the great controversy has been in progress; the Son of God and His heavenly messengers have been in conflict with the power of the evil one, to warn, enlighten, and save the children of men. Now all have made their decisions; the wicked have fully united with Satan in his warfare against God. The time has come for God to vindicate the authority of His downtrodden law. Now the controversy is not alone with Satan, but with men. ‘The Lord hath a controversy with the nations;’ ‘He will give them that are wicked to the sword.’ For six thousand years, Satan’s work of rebellion has “made the earth to tremble.’ He had ‘made the world as a wilderness and destroyed the cities thereof.’ And he ‘opened not the house of his prisoners.’ For six thousand years his prison house has received God’s people, and he would have held them captive forever; but Christ had broken his bonds and set the prisoners free.”

Published by Christian Faith Publishing, Brother Clifton’s new book is a brave and necessary rendition of the epic spiritual warfare between heaven and hell, tracing the story of grace and deliverance from the fall to creation, to the first sin, the advent of Christ Jesus, the dark ages, investigative judgment, the beast, and the first and final warnings.

Brother Clifton’s book is a powerful counterattack to Satan’s lie that God’s mercy to humankind through Jesus’s death on the cross defies justice, since the price of sin is death—but this is an insidious deception, and now here is the last greatest conflict between Christ and Satan.

View a synopsis of “Justice and Judgment, Mercy and Truth” on YouTube.

Consumers can purchase “Justice and Judgment, Mercy and Truth” at traditional brick & mortar bookstores, or online at Amazon.com, Apple iTunes store, or Barnes and Noble.

For additional information or inquiries about “Justice and Judgment, Mercy and Truth”, contact the Christian Faith Publishing media department at 866-554-0919.