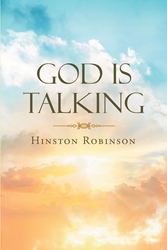 “God Is Talking”: a reflection on thought and how God speaks to people. “God Is Talking” is the creation of published author, Hinston Robinson. Hinston grew up on a farm in rural Georgia as the ninth child in a family of eleven. His parents impressed upon their children the importance of self-reliance and self-respect. His mother often told them, “if you can’t say something good about someone, don’t say anything.” His father stressed the importance of word and deed. “Your word was your bond, and what you chose to say or do was your responsibility to stand up and take ownership for both…” is what he would say. Hinston Robinson has lived by these guidelines throughout his youth and adulthood.

“The title of the book was selected after much thought into the process of how your mind never seems to rest or stop.” --Hinston Robinson

Published by Christian Faith Publishing, Hinston Robinson’s new book discusses God’s hand in people’s thought processes. When he nearly drowned to death at an early age, Hinston began reflecting on the nature of thought. The human mind never seems to rest. As he continued to dwell on his own thoughts processes, he realized God must play some role. He now believes God uses the never-ending thought that consumes the mind to talk to His children.

View a synopsis of “God Is Talking” on YouTube.

Consumers can purchase “God Is Talking” at traditional brick & mortar bookstores, or online at Amazon.com, Apple iTunes store, or Barnes and Noble.

For additional information or inquiries about “God Is Talking”, contact the Christian Faith Publishing media department at 866-554-0919.