After Achieving a Crowdfunding Success for its ‘Lifestyle Charger’ for Smartphones in 2017, the new JUICED 2.0 Wireless Group Charging System Launches on Kickstarter 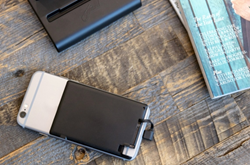 We’re excited to introduce our new JUICED 2.0 that continues to solve the problem of mobile charging and group charging, but now offers a faster mobile charging pack and other new features.

Revolutionizing the way smartphones are charged, the new JUICED 2.0 Wireless Group Charging Station returns to Kickstarter – featuring a faster charging system, and a thinner and stronger battery pack compared to its original device.

Created by Thomas J. Martel, Jr., a student at the University of South Carolina, the original JUICED system launched in 2017 was selected by the HBO Show ‘Billions’ as one of the 10 most promising inventions – which boosted presales to enable the wireless group charging system to become a success on Kickstarter.

“For 2018, we’re excited to introduce our new JUICED 2.0 that continues to solve the problem of mobile charging and group charging, but now offers a faster mobile charging pack and other new features,” Martel said. “With the new JUICED 2.0, we expect our previous backers and new crowdfunding supporters will want to be the first to use our easy, wireless way to charge smartphones whether they’re out overnight or just sitting on the couch binge-watching their favorite shows.”

JUICED 2.0 can charge up to six phones at once with three battery packs – and can charge three additional phones using its patented charging base. In addition, the group wireless station consists of always-charged attachable (boost) packs– with each pack using an extended charging tip that eliminates the need for annoying, easy-to-lose phone cables.

“With our boost backs, you can charge your smartphone anywhere at any time and get a quick and easy 50 percent power boost to your phone when you need it most,” Martel said. “They’re so small that they can fit into any pocket or small compartment. This represents a complete update from the outdated charging cord, giving the user more portability, simplicity and freedom.”

The new JUICED 2.0 features include:

The JUICED 2.0 charging station and charging packs are available in three colors, silver, white and black, and can be mixed and matched.

“Users will find that JUICED 2.0 eliminates the need for them to carry smartphone cords, wires, ugly charging cases and bulky battery packs and gives them freedom from the wall socket when it comes to keeping their smartphones ‘juiced’ and powered up,” Martel said.

For more information and to order JUICED 2.0 at an early-bird discount during crowdfunding, visit the JUICED 2.0 Campaign Page on Kickstarter.

About JUICED
Thomas J. Martel, Jr. founded JUICED, LLC in 2015 to become a leader in the development of mobile group-charging batteries with a focus on the mobile needs of the millennial generation. Martel teamed up with business professors and other corporate mentors in launching the company – with the future goal of creating other battery and phone accessories that will be used by restaurants and eventually sold on the retail market. The company’s first product, the wireless charging station JUICED, completed a successful Kickstarter campaign in 2017. For more information, visit the JUICED 2.0 Campaign Page on Kickstarter.