Pastor Alexander Grant’s newly released “Prophecies, Dreams And Visions” shares insights from a modern seer whose life was saved when he became a Christian.

“Prophecies, Dreams And Visions” from Christian Faith Publishing author Pastor Alexander Grant shares the wisdom of a boy who was haunted by evil spirits and endlessly attacked by witchcraft in his homeland of Jamaica. It was only after he accepted Jesus Christ into his heart as his personal savior that he was empowered to fight back against the evil that sought his destruction. 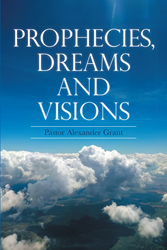 “Prophecies, Dreams And Visions”: messages from a seer empowered by his spiritual gifts and embrace of Jesus Christ. “Prophecies, Dreams And Visions” is the creation of published author, Pastor Alexander Grant. Grant resides in Cleveland, Ohio. He migrated from the island of Jamaica in July of 1981. He is the youngest of eight siblings. At a very young age, Pastor Alex knew he had a gift for dreams and visions. As a minister, he found it difficult to share his calling with others. While attending a Pentecostal church in Cleveland, where he was appointed an elder, he started working harder to embrace his gifts. In the early stages of his ministry, Pastor Alex was led by the Holy Spirit to minister to one of the deacons. Utilizing his gifts, Alex explained to the deacon that the Holy Spirit had given him a piece of wisdom. Elder Grant stated, “I was told to tell you by the Lord not to move and to stay where you are.” The deacon angrily responded, “I’m not going anywhere. I’m not moving,” as he walked away. This moment of uncertainty led Pastor Alex to question his gift. Exactly one week later, receiving a confirmation from God, the same deacon announced to the congregation that he was offered a job out of town and that he had accepted it. This restored Pastor Alex’s faith in his gift. It was the humble beginnings of Pastor Alexander Grant’s walk with the Lord.

“I saw demons and shadows as often as we see the sun and the moon. As the sun went down, so did the courage I felt in the protection of the day. Dread gripped my heart like a vice. Terror was my company, and peace would not come until long-awaited sleep mercifully took me away.” --Pastor Alexander Grant

Published by Christian Faith Publishing, Pastor Alexander Grant’s new book recounts his spiritual journey through the wisdom he has gained.

There was a shadow that belonged to no one. It crept along the floor, unaware that it had been detected. “Ma,” the young Alex Grant screamed. In his attempt to get his mother’s attention, the shadow spirit became aware of the possibility that the boy had seen him. Unsure, he moved slowly back and forth to see if Alex would follow him with his eyes. To his surprise, the boy followed his movement. When he revealed his blazing red eyes in astonishment, it sent a shiver through Alex that he can still see today.

If Pastor Alexander Grant had been born in the days of Christ, they would have called him a seer and a prophet. He was, however, born in Spanish Town, Jamaica in the year of 1969. His gifts were shared by many in his family who fully understood the attacks he endured were meant to destroy his life. They sought to forever quiet his gift and lay to rest the man he was to become. His whole life shifted the day he accepted Jesus as his personal Lord and Savior. It was then he began his spiritual journey.

View a synopsis of “Prophecies, Dreams And Visions” on YouTube.

Consumers can purchase“Prophecies, Dreams And Visions” at traditional brick & mortar bookstores, or online at Amazon.com, Apple iTunes store, or Barnes and Noble.

For additional information or inquiries about “Prophecies, Dreams And Visions”, contact the Christian Faith Publishing media department at 866-554-0919.