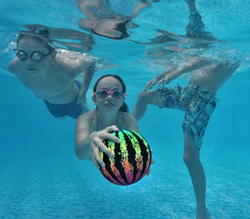 “We made the decision to bring a smaller version of Watermelon Ball® to market based on the overwhelming success of the original 9-inch diameter ball, along with customer interest in a lighter-weight, family-friendly size”, says PlaSmart CEO Tim Kimber.

“We made the decision to bring a smaller version of Watermelon Ball® to market based on the overwhelming success of the original 9-inch diameter ball, along with customer interest in a lighter-weight, family-friendly size”, says PlaSmart CEO Tim Kimber. Anticipating this demand, Watermelon Ball creator, Jeff Larson, had already been working on a scaled down ball that would be easier to manage for family play and children with smaller hands. The result is Watermelon Ball JR, a 6-inch diameter ball that weighs only 4.17 lb. when filled with water, rather than the hefty 7.8 lb. of the original Watermelon Ball®; the size that continues to be a huge hit with teens and young adults. And, the brightly colored rainbow design of Watermelon Ball JR is highly visible in water.

About Watermelon Ball®
Many people will remember playing the game of watermelon ball, using real watermelons, at summer camp or in backyard pools. Watermelons are nearly neutrally buoyant; first sinking in water and slowly rising to the surface. This characteristic makes them ideal for playing all kinds of water games.

Watermelon Ball® History
The development of Watermelon Ball® began in 2004 with a group of college students who frequently got together to play a swimming pool game that used real watermelons. The intensity of play caused the watermelons to crack, and sometimes accidentally smash. Concerned that they were making a “pretty good mess”, as well as spending a lot of money on watermelons, one student (Watermelon Ball® creator, Jeff Larson) designed a ball that behaved like a watermelon, but could withstand intense play.

The watermelon ball sessions continued using the tough new Watermelon Ball® and competition became more fun than ever. In fact, the artificial Watermelon Ball® allowed for increased strategy, dribbling the ball on the bottom, and passing up to ten feet underwater. And, without the danger of cracking or smashing, Watermelon Ball® could even be bounced off pool walls to teammates.

“My friends and I had a ton of fun playing the game with real watermelons in college. When I came up with the new ball and saw how much better it made the game, I realized I had something that could change how people play in the pool”, says Jeff Larson. I love seeing people get introduced to the game, play it, love it, and become passionate about it.”

About PlaSmart Inc.
PlaSmart Inc. is a Canadian-based, global toy distributor that chooses products that are smart, simple, and fun. It seeks out interesting, one-of-a-kind toys that meet its 'smart and simple' philosophy and avoids toys that are difficult to understand or operate. Strong brand values and quality products, tested to the highest standards, form the foundation upon which PlaSmart was built. Established in 2003, the company continues to focus on toys and games that develop motor and dexterity skills, balance, creative and imaginative play, eye-hand coordination, problem-solving and, of course, fun.

PlaSmart’s products include multiple award-winning toys and games, including the ever-popular Original PlasmaCar®, a mechanical marvel powered by the cleanest and most inexhaustible energy source, Kid Power. PlaSmart is proud to work with toy inventors and designers who share its vision. The company’s products are available on five continents and in over fifty countries. For more information visit PlaSmart’s website.